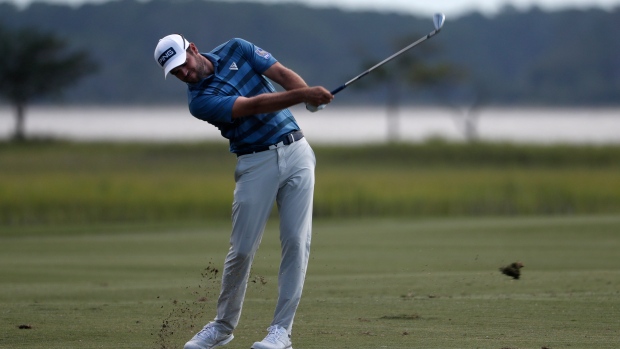 Up, down, all around and never boring.

That was the story for the three Canadians who played together in Thursday’s opening round of the U.S. Open, and experienced exactly what this tournament is supposed to deliver.

Corey Conners made five birdies and six bogeys to end up at 1-over par. Adam Hadwin had three birdies, three bogeys and a double, and Mac Hughes had four birdies, two bogeys and two doubles. They both concluded the day at 2-over.

Consistency? Not at a U.S. Open.

Low scores? This was a day where there were more red numbers than usual and yet Winged Foot in Mamaroneck, N.Y., was still a test.

Conners got off to the best start, posting birdies on two of his first five holes before making the turn at even par. On his second nine, he logged just two pars going back and forth with birdies and bogeys before ending the day on a positive note, sinking a seven-footer on the last hole for a birdie.

"Lunch tasted a lot better after making a birdie there,” said Conners. “All in all it was a decent day. I definitely could have been lower. Some mistakes I'd like to have back but nice to finish the way I did."

Hadwin played his opening five holes in three over including a double on the 14th (his fifth hole) after driving it into the rough and being unable to reach the green. His second nine included two birdies and two bogeys, and he signed for a 2-over 72.

“It was OK,” summed up Hadwin. “I left a few shots out there. This is the U.S. Open and bad shots are going to happen but I felt like I could have been two or three shots better.”

Hughes had the roughest start of the trio, struggling to find the fairway and playing his first nine in 4-over. He made a double on the par-3 13th after his tee shot went long and he scrambled from there. He added another double on the 16th after hitting his tee shot into the deep rough.

But the Dundas, Ont., product made a solid rally on the second nine buoyed by his putter. He posted birdies on the first, where he drained a 26-foot putt and the second, where he hit his approach from the rough to five feet. On the sixth hole, he rolled in a birdie from 27 feet.

“It was a tough start but it was nice to rebound and finish with some positive momentum,” said Hughes. “I had a hard time hitting fairways out of the gate but I got better on my second nine. Getting a few coming in will make tomorrow a little easier to get back into it.”

While good starts for all three, the low scoring on the day left them well back in the pack. Winged Foot was still difficult but the soft conditions and non-existent wind conspired to allow plenty of scores in the red numbers, including Justin Thomas’s 5-under 65.

"Starting the day I would have said no, it's not possible,” said Conners of the low scoring, “but after playing and getting into the round the conditions were pretty friendly, there wasn't much wind. Perfect comfortable temperature where it's warm enough that the ball is still flying normal distances. The wind was not really blowing at all to affect shots. After playing a couple holes, you could certainly see how someone could get it going."

"Incredibly comfortable,” Conners stated. “We had fun out there. We all sort of struggled at times but it was great and a very comfortable pairing for all three of us and definitely was more relaxed than I have been in other major championships and I think the comfort level contributed to that a little bit playing with some good friends."

There was a bit of hockey talk and an examination of Hughes’s 9-wood, which he put in the bag this week and used to his benefit out of the gnarly rough on Thursday. They also poked fun at each other and their shots, something that likely wouldn’t have happened with any other playing partners.

The fourth Canadian in the field, Taylor Pendrith, made his U.S. Open debut in style, finishing his day birdie-eagle to end up at 1-over. The long-hitter from Richmond Hill, Ont., reached the 566-yard, par-5 ninth hole using a driver and a 6-iron. He then rolled in a putt from 22 feet to close out his day.