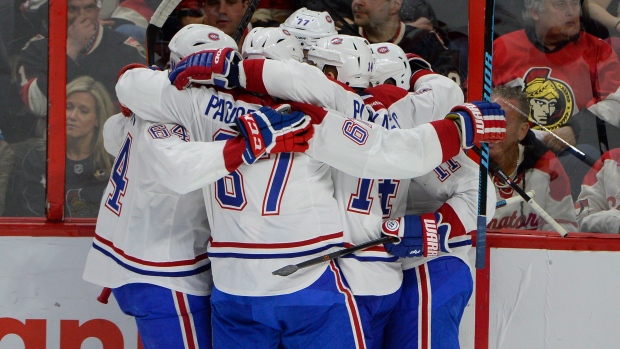 OTTAWA - There was as much relief as jubilation when the Montreal Canadiens finally finished off the Ottawa Senators.

It took a shutout from Carey Price and goals from Brendan Gallagher and Max Pacioretty for the Canadiens to post a 2-0 victory over Ottawa in Game 6 on Sunday and advance to the second round of NHL playoffs.

Montreal won the best-of-seven series 4-2 and will next face the winner of the Detroit-Tampa Bay series, which the Red Wings lead 3-2.

The Senators outshot Montreal 43-20 and dominated most of the final two periods. Price, however, showed why he is a nominee for the Vezina Trophy as the league's top goalie and a likely candidate for most valuable player honours as well with a few sizzling saves and a lot of solid, mistake-free play.

It was the first time this season the Senators were shut out.

"Price stepped up and he was the difference," said Montreal defenceman P.K. Subban.

After taking a 3-0 series lead, it took the Canadiens three attempts to put away a never-say-die Ottawa side that had only made the playoffs on the final weekend of the regular season after a frantic final push.

"This team has been a real treat," said Ottawa coach Dave Cameron. "We got beat by a pretty good hockey club and, when we get over it, we'll feel pretty good about what we accomplished here."

Montreal, which reached the Eastern Conference final last spring, is in the second round for a second year in a row for the first time since 1992 and 1993.

"I know some people thought it would be pretty easy for us to get the fourth win, but we knew they were a capable team that battled hard all season to get into the playoffs," said Subban. "I like the way we had to win this series.

"We deserved it. We worked for it. I thought we had some bounces early in the series. We didn't get them as the series went on but today we stuck to the plan regardless of what happened. And when you have Carey Price back there, it makes everything a lot easier."

Pacioretty sealed the win with an empty-net goal with less than one second remaining.

"Advancing is such a great feeling but we have to be honest, we got some bounces tonight," said Pacioretty. "They poured it on us pretty good and Carey was a wall back there."

After controlling the early going, the Canadiens got the first goal for the first time in the series when Gallagher took a high Greg Pateryn shot off his body and batted it past Craig Anderson at 13:26.

"It hit my arm and I felt it go that way so I spun around, found the puck and was fortunate to put it in," said Gallagher. "You don't plan on whacking them out of the air all the time but I was able to catch the goalie out of his position."

Montreal had the first six shots of the game but the Senators outshot them 16-3 in a dominant second in which they did everything but score.

The 20,500 fans at the Canadian Tire Centre were screaming for a too many men on the ice call against Montreal when perhaps a worse omission occurred as referee Chris Lee blew a quick whistle just before Jean-Gabriel Pageau put a puck in at 6:55 that had fallen past Price.

"It was just bad puck luck," Cameron said about the disallowed goal.

With Senators legend Daniel Alfredsson cheering from a luxury box, Ottawa went all out in the third for the equalizer but Montreal finished with strong checking and two or three more solid saves from Price.

A late tripping call on rookie Jacob de la Rose gave Ottawa a last chance on the power play, and near the end of it pulled Anderson for a two-skater advantage. Late-season pickup Torrey Mitchell tied up two faceoffs in the Montreal end, Price made some stops and Pacioretty finally put it away.

"That's what it's all about," Price said about the hairy final minute. "That's what makes it fun.

"Since you're a little kid you dream about being in those situations."

Notes — P.A. Parenteau returned to the Montreal lineup for the first time since Game 1. Brian Flynn sat out. . . There was concern over Clarke MacArthur, who sat out the third period of Game 5, but he played for Ottawa. . . The Canadiens ended the series 1 for 20 on the power play.