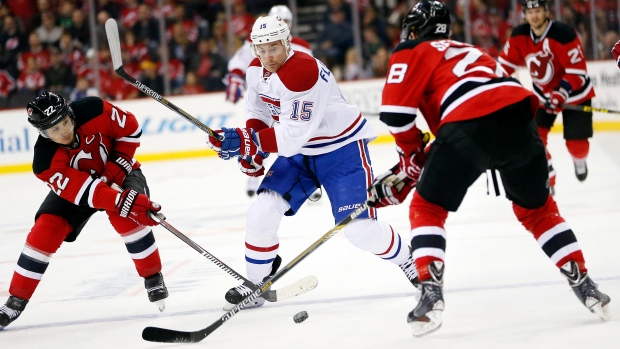 NEWARK, N.J. - There are a few reasons the Montreal Canadiens have the NHL's best record.

Rookie goaltender Mike Condon's play in place of sidelined NHL MVP and Vezina Trophy winner Carey Price has been a big one.

Alex Galchenyuk and Sven Andrighetto scored in regulation and again in the shootout, Condon made 25 saves and the Canadiens rallied from a two-goal deficit to beat the New Jersey Devils 3-2 on Friday night for their fourth straight win.

"We never give up," said Andrighetto, who has two goals in three games since being recalled from the AHL. "It shows we kept pushing and we all believed. We all pulled in the same direction with the bad start we had."

Andrighetto got the game winner with a snap shot off the post that beat Cory Schneider.

Condon preserved the win by stopping Patrik Elias with his pad on the Devils' fifth attempt in the shootout.

"This is huge," said Condon, now 8-2-2. "Anytime you get a win it's huge. It's not about one guy. We got contributions in the shootout and we stuck with it even when we were down 2-0. That's a key part of our game."

Condon thought he had lost the game for a split second. With the shootout tied 1-all, Lee Stempniak had a chance to win the game on the Devils' third attempt. His backhander hit the post, but Condon briefly left the crease thinking it was in and the game was over.

Adam Henrique and Stempniak scored for the Devils in regulation. Jacob Josefson had the only New Jersey tally in the shootout. The Devils have lost four of five games.

"I think if you really look at the game, Schneider made some unbelievable saves and we could have been down," Devils coach John Hynes said. "That's a high-end offensive team. It's a very good team with good goaltending. We stuck with it and competed hard. We found a way to get a point. We would have liked to have had two."

Schneider had two outstanding stops in overtime, including a point-blank save on Max Pacioretty on a power play in the waning seconds and a short-handed stop on Tomas Plekanec's breakaway.

Andrighetto pulled Montreal within 2-1 with 4:43 left in the second period, and then Galchenyuk tied it with 8:46 left in the third.

Price is sidelined again with a lower-body injury. He just recently returned after missing eight games with the same injury.

This was the opener of a home-and-home series with the teams playing in Montreal on Saturday night.

After a scoreless first period, the Devils jumped ahead 2-0 in the opening 9:06 of the second period, only to see the Canadiens rally to tie it.

Galchenyuk scored by using his speed on a breakaway. Pacioretty set it up with a pass that allowed Galchenyuk to split defencemen Andy Greene and Adam Larsson and beat Schneider with a backhander for his third goal in as many games.

"I'm relaxed, having fun and just trying to go out there and made plays," said Galchenyuk, who was switched to a line with Plekanec and Pacioretty in the period. "It definitely paid off for me."

Montreal got back in the game late in the second period. Lars Eller kept a clearing pass by Devils defenceman Jon Merrill in the attacking zone and Andrighetto beat Schneider with a shot that handcuffed him.

Schneider robbed Plekanec with a diving glove save with 3:32 left in the first period and stopped David Desharnais in close on a rebound a minute later. He also stopped Desharnais on a 2-on-1 break in the second period.

NOTES: After signing a one-year contract earlier in the day, Devils F Tyler Kennedy was in the lineup. ... New Jersey D David Schlemko missed his third straight game with a lower-body injury. ... With Price out, G Dustin Tokarski was recalled from St. John's to back up Condon. ... D Greg Pateryn was back in the Canadiens' lineup after being a healthy scratch against the Rangers, replacing Alexei Emelin. ... D Andrei Markov picked up his 400th assist with the Canadiens on Galchenyuk's goal.