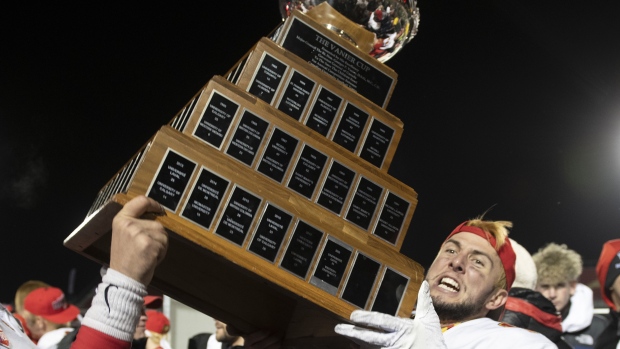 The focus of the sports world amid the COVID-19 pandemic has understandably been on the most prominent professional leagues, given the money and jobs at stake and the financial resources they can bring to try to ensure there are adequate safety precautions in place prior to restarting their seasons.

But the most devastating effects of the pandemic on sports will be on those leagues that aren’t able to draw on millions of dollars - the minor leagues or developmental tiers of sports where there are no rich television contracts to carry things forward and where the risk-reward equation is very different.

On Monday, U Sports, Canada’s governing body of university sports for 56 institutions, announced the cancellation of six fall championships, including the Vanier Cup, which has been handed out every November for university football supremacy since it began in 1965.

Each of the four conferences across Canada will determine which, if any, sports will go ahead with regular season play or conference championships, but the football decision is official for everywhere but Quebec, where playing games within the province’s six programs remains a consideration.

It’s a massive loss for what is the biggest football league in the country and the primary development platform for Canadian talent in the CFL.

In a sport that involves such large numbers of players, coming on and off campus, on the practice field and potentially in the classroom, it’s not hard to see why the risks outweighed the rewards.

But as much as this is a health-and-safety decision, it’s also a financial one, given that many campuses won’t have students returning to campus and thus won’t have the accompanying student fees which fund athletic programs.

There is also the issue of those who contribute privately to U Sports programs - their priorities may have shifted because of the crisis.

Schools also felt a need to give students clarity about what they would be happening this summer, with training camps for U Sports football having been scheduled for August.

​The bigger concern beyond this season is that just as some businesses that have been forced to close during the pandemic may never return, could the same be true of some football programs? After all, athletic departments now under financial pressure may have to examine whether the biggest and most expensive programs are still viable.

There may be other football leagues that will play in Canada this summer and fall, with the Canadian Junior Football League a possibility for some U Sports players looking for an outlet. But the rest of the players are left with the question of what being a full year away from playing the sport means for them, especially those whose goal is to play professionally.

It’s worth noting that the impact on long-term player development may be less pronounced in football than some other sports, given the history of players excelling in the sport after starting late or being away from the game for periods of time. It’s also important to note that no football games doesn’t mean no football development for players. It’s unclear how much teams will be able to do when it comes to workouts and practices, but there could be circumstances where players may practice and coaches continue the teaching of the sport.

That becomes a tougher challenge on campuses that are going to be closed to returning students, but the guidance on physical training and film study will continue this season even without a schedule of games.

How will this impact the CFL overall?

The league has had loose discussions with U Sports officials about how the two may work together to assist players who were entering their final years of eligibility and hoping to enter next spring’s CFL Draft.

But the greater questions are for those players who were entering their final years of eligibility and now must decide whether returning for another semester in the fall of 2021 is worth it, if they’ve already earned their degrees. And what of those players who blossom in their final years of university eligibility, a common phenomenon in a sport brimming with late bloomers.

There are other questions that remain unanswered – such as what about players who were entering their fifth and final years of eligibility? And will this season count as a sitting-out a season when it comes to eligibility to transfer to another program?

And how will CFL teams go about trying to project the professional potential of those players who wish to enter the draft next spring, even they haven’t played football in nearly a year-and-a-half.

This kind of dilemma goes well beyond just the transition from U Sports and the CFL. Players entering their final years of high school are facing the uncertainty of what no season would mean, especially those who’ve been focused on achieving athletic scholarships - either within Canada or in the NCAA.

Similar scenarios face athletes at the developmental levels of every sport, which includes this summer’s amateur baseball schedule, high school basketball this coming fall and winter and the Canadian Hockey League, the greatest supplier of talent to the NHL.

It’s been said for a while that mass spectator sport may be among the last things to return from the consequences of the pandemic.

But the path for players hoping to get to those higher levels of their sport is going to suffer far greater effects.