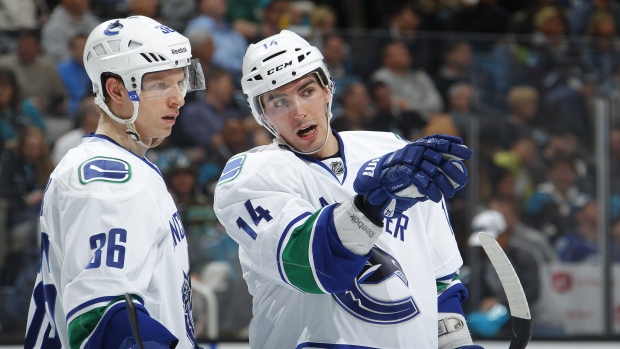 As the sun rose on TradeCentre 2017, the dawn of a new era also cracked in Vancouver.

For the first time since 2005, the Canucks awoke without either Alexandre Burrows or Jannik Hansen on the roster - two staples alongside Daniel and Henrik Sedin in Vancity over the last 1,387 games.

Hansen was traded to the San Jose Sharks early Wednesday morning in exchange for prospect Nikolay Goldobin and a conditional fourth-round pick.

Burrows, of course, was dealt to the Ottawa Senators on Monday for prospect Jonathan Dahlen. Both Burrows and Hansen cooperated with the Canucks on no-trade clauses to facilitate the trades.

As the transition began to take shape, general manager Jim Benning said he met with the Sedins on Monday to explain the direction of the franchise.

“They’re on board,” Benning told reporters, “and excited about what we’re doing.”

Short of being a fly on the wall, it is impossible to know the tone or message of their conversation, though it isn’t difficult to imagine that a certain “r-word” was used.

Phew. There, Vancouver said it this week - or at least took the first steps toward one, trading away two lifelong Canucks. After a couple seasons of resisting and rebuking the term, the Canucks seem to embrace it now, moving forward with an eye on the future without so much focus on the present. Finally.

It wasn’t easy to dismantle a core that was oh so close to a Stanley Cup, even if it was in 2011. Not when those two stars still embody the fabric of the franchise. Not in a salary cap world. There was a yearn to do right by the Sedins, loyal core players under contract for one more year, to try to be competitive.

But it was time.

“I’m overwhelmed right now,” Hansen told reporters after his trade. “I’m excited to be going there, but leaving here is tough. I like it here.”

Whenever the so-called winners and losers are determined after 3 o’clock eastern time on Wednesday afternoon, few teams will come out ahead of Benning and the Canucks.

Last year, the Canucks failed to move on from defenceman Dan Hamhuis and forward Radim Vrbata, instead watching them walk as free agents for nothing.

This year, Benning delivered Burrows and Hansen - who had one year remaining on his contract at $2.5 million - to playoff contenders for returns that could help jumpstart the next Canucks run.

In Dahlen, the prospect acquired for Burrows, the Canucks nabbed a 19-year-old centre that Swedish scouts say Ottawa will regret moving for a long time. He has posted better point totals than current Nashville Predators sniper Filip Forsberg did at the same age in Sweden’s second division.

Goldobin, 21, was drafted 27th overall by the Sharks in 2014. The Russian-born left winger has racked up 85 points over the last two seasons. He will report to the Canucks after playing with San Jose’s AHL affiliate.

“For our young guys, it’s an opportunity to show what they’ve got over these last 20 games,” Benning told reporters. “We’ll see what the future likes.”

With just two playoff wins to show for the last four seasons, it has been a long road for Vancouver. But this is when the fun begins.

There is a path forward now.

Deadline Day 2017 has arrived. TSN Hockey’s Trade Bait board has featured 16 of the 17 players traded so far. Here are 35 players potentially on the move between now and 3 p.m. ET Wednesday: