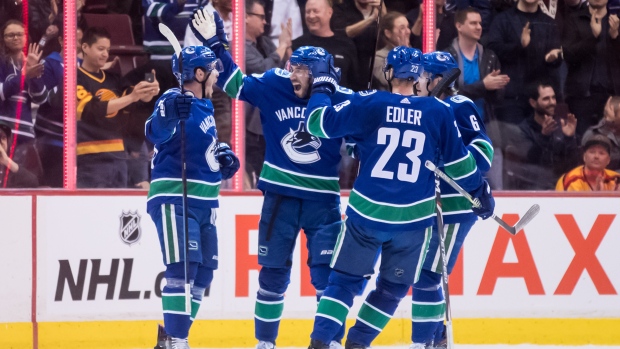 VANCOUVER — Getting some bounces on the power play has helped put the Vancouver Canucks back into the NHL playoff picture.

Bo Horvat scored two goals and added an assist as the Canucks built a big lead then withstood a late Ottawa Senators surge for a 7-4 win Wednesday night that moved Vancouver to within four points of a wild-card spot in the Western Conference.

"Those weren't the bounces we were getting earlier," said Horvat. "We were getting those opportunities, they just weren't going in for us.

"Special teams is huge. For us to get a couple of power-play goals in back-to-back games and find the back of the net has been big for us."

The Canucks (32-32-10) have 74 points with eight games remaining. Arizona holds down the final playoff spot with 78 points. Vancouver still needs to climb over Chicago (74 points), Colorado (76) and Minnesota (77) to catch Arizona.

Just last week the Canucks were considered roadkill on the playoff highway. Since then Vancouver has won three straight games, matching its longest winning streak of the season.

"It's just crazy," said Horvat. "It just shows you never now what can happen.

"Down the stretch here we have been playing some good hockey. We're just going to keep plugging away and try and make a run for it. We're playing good hockey. We just have to keep it up."

Tanner Pearson also had two goals and an assist for the Canucks. Loui Eriksson had an empty-net goal and three assists while Jake Virtanen also scored.

For Eriksson it was the third time in his career he had four points. The last was April 5, 2014, when he was with the Boston Bruins.

"It's always nice to have a night like this," said Eriksson. "It's been a while since I've had this many points in a game."

Pearson's second goal with just 57 seconds gone in the third period made it 5-0 Vancouver but the Senators refused to roll over.

Ottawa battled back with Max Veronneau, Brady Tkachuk and Oscar Lindberg scoring 4:48 apart. Anthony DuClair scored on the power play with under two minutes left with goaltender Craig Anderson on the bench to make it 5-4.

"I really liked the character we showed in the third," said centre Jean-Gabriel Pageau, who had two assists. "Everyone I'm sure thought we were going to quit. I'm glad nobody quit in here."

Veronneau's goal was in first his three NHL games since signing as a free agent after playing with Princeton University.

The Senators, who are last in the Eastern Conference with a 25-42-6 record, saw a two-game win streak snapped. Ottawa played most of the game a player short after defenceman Cody Ceci left in the first period with an upper-body injury after blocking a shot.

"They threw some pucks at the net, pucks went in," said Green. "I thought we were still in control of the game.

"I didn't feel like it was one of those games where momentum was swinging, and they were all over us. I thought it was a pretty solid effort from our group."

NOTES: Pettersson received a first-period standing ovation in recognition of breaking the Canucks’ record of 60 points in a season by a rookie with an assist in Chicago Monday night. … Boeser has nine points on a career-high eight-game scoring streak (three goals, six assists). The Canucks opened a stretch of seven games at Rogers Arena, their longest homestand of the season. … Vancouver last won three straight games Dec. 6-11 with victories over Nashville, St. Louis and Columbus. … Ottawa’s Thomas Chabot, who has missed the last two games with a broken toe, is expected to play Saturday in Edmonton.