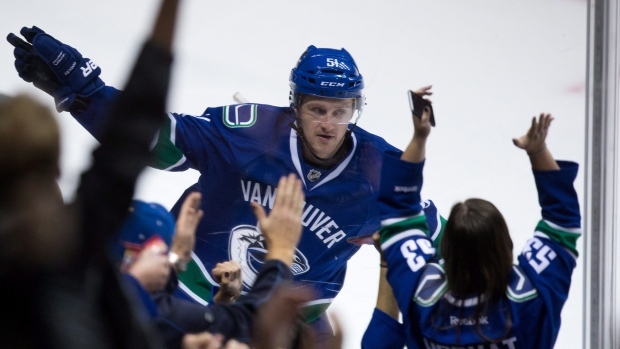 VANCOUVER – Jared McCann is the talk of the town right now in Vancouver – and that includes inside the Vancouver Canucks locker room. The 19-year-old is causing quite stir these days doing all he can to prove he belongs in the National Hockey League on a full-time basis. And his teammates are enjoying the front row seat to what has become the best story on the hockey club three weeks into the new season.

McCann was at it again Tuesday night scoring twice in the Canucks 5-1 home ice romp over the Montreal Canadiens. In just his seventh game in the league, McCann looked like he’d been fired out of a cannon opening the scoring just 2:30 into the game, adding a second goal – his fourth in just seven games -- later in the period and registering a team-high five shots on net before the night was through.

“Oh, he’s awesome,” Alex Burrows raved following the game. “He’s been so good for a young guy. He’s got that offensive flair. You can tell even in practice. He snaps the puck and he likes to go in traffic and he likes to shoot pucks and score goals. That you can’t really teach. He’s fun to watch.”

Derek Dorsett had one of the best views of McCann’s big night. The veteran winger, who added a goal of his own to round out the scoring, patrolled the right side on a line with McCann and Brandon Prust last night.

Last season, Dorsett played a key role in the development of Bo Horvat helping him make the jump from junior to the NHL. And now he’s taken on that mentor role again -- only this time it’s with McCann.

“He’s been great,” Dorsett says. “He’s a kid that wants to learn and is willing to learn. He’s been better in every game. He thinks the game really well and when he’s good in the d zone, he gets some opportunities on offense. He’s played with me and Prusty mostly, and we’ll just keep working with him.”

Prust’s time with McCann may have to wait. The rugged winger left the game against his former team with an apparent ankle injury late in the second period. He won’t travel with the Canucks on a brief two-game road trip to Dallas and Arizona and his return to the line-up is uncertain. However, before Prust was forced out of action, he had left his mark on Tuesday’s game setting up both of McCann’s goals.

In Prust’s eyes, much of the rookie’s success comes down to a confidence level that, as expected has fluctuated at times in the early going of his professional career. But that confidence was sky-high Tuesday night and on display for all to see.

“He’s improved a lot even the last few games and I think his confidence is getting back,” Prust says. “I think sometimes near the start of the season, he didn’t have as much of confidence. He’s getting more comfortable out there. He’s impressed me since camp. Great skater, great shot, he’s got good vision out there. He’s fun to play with.”

Fun to play with, perhaps. But as opponents are quickly discovering, Jared McCann’s not a whole lot of fun to play again. Ryan Miller only faces him in practice, but the Canucks netminder who has seen thousands of shooters over his 15-year NHL career has paid particular attention to McCann and what makes him so effective when the puck is on his stick.

“He has a different kind of shot with where he holds his hands and the way he chooses and hits his spots,” Miller explains. “Younger guys, I find, shoot a little differently because they grew up on composite sticks. They find their voice so to speak in a little different way than guys used to. It’s good for us. He’s smart. And he does a great job of getting open.”

Time is now ticking on the Canucks to make a decision on Jared McCann before the first year of his entry level contract kicks in after the nine game mark. He’s played seven and so a decision will likely need to be made by week’s end if he plays both games on the upcoming road trip. And how could they possibly take him out of the line-up after the way he performed on Tuesday? Right now, there is no question that McCann is among the team’s top 12 forwards so it would seem incredulous that the Canucks could send their leading goal-scorer back to junior hockey.

That, however, is not McCann’s call. He’s stated his case with his exceptional performance on the ice and it’s now in the hands of Canucks management and the coaching staff to decide the best course of action.

“That’s their decision and I’m glad I’m not the one making it,” Alex Burrows adds with a laugh. “At the same time, you have to look at the long term and evaluate so much stuff. It’s not only a small sample. They want him to be successful for 15 years on this team. I’m sure they’ll make the decision that’s best for the team and for him.”

But if Jared McCann is still here and playing for the Vancouver Canucks next week it’s because he will have earned his spot on the team. And if that’s the case, it’s pretty clear, the guys in the locker room will be happy to have him around.