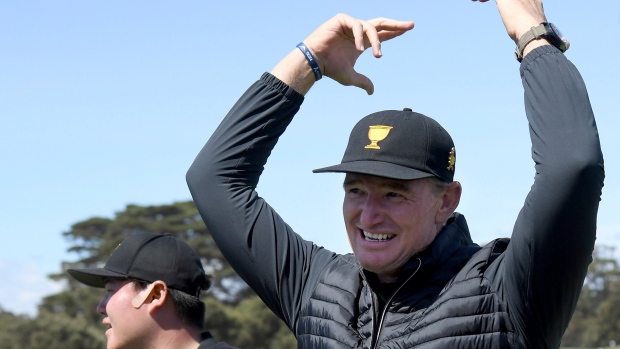 Tiger Woods began his week as playing captain with an exquisite short game that carried the U.S. team to the shortest match of the opening session. Woods had two pitch-and-runs that led to birdies for a 2-up lead through two holes, and he chipped in for birdie on the par-3 fifth. This is the only match in which an International team never led. It still took until the 14th hole for the Americans to take control. No hole was halved until both teams made par on No. 8. Woods made an 8-foot birdie putt on the 14th for a 3-up lead, and closed it out with an up-and-down short of the green for birdie on the par-5 15th. Woods had never won a fourballs match at Royal Melbourne.

The biggest cheer at the start was for Im chipping in for eagle on the opening hole in what turned out to be the tightest match of the day. Cantlay tied the match with a birdie on the sixth, and the Americans took their only lead when the International team made bogey on the next hole. Im won the ninth hole with a par, and it was all square the rest of the way until Schauffele and Cantlay failed to make par on No. 16 to fall behind, and not catch up over the final two holes.

Scott had been pointing to this opening session for two months, and it showed. He snap-hooked his opening tee shot. The hole was halved with pars. Scott and Finau traded birdies on the par 3s at Nos. 3 and 5, and An made birdie at No. 6 to give the International team the lead for good. Scott made five birdies, none bigger than a 12-footer on the par-3 14th to halve the hole after Finau made birdie, keeping the lead at 2 up. Scott closed it out with a 4-foot par putt on the 17th.

Reed heard from the gallery on the opening hole, as expected, for his rules violation in the sand in the Bahamas last week, and there was more needling through the day. There just weren't many birdies — three by Reed, two by Simpson. Matsuyama was making everything with birdies on three straight holes early for a 2-up lead. The International team was in charge the rest of the way until Reed hit it to 4 feet on No. 12 for birdie, and made a 12-foot birdie on the 16th to square the match. Matsuyama, with Pan in tight, holed a 25-foot birdie on the 17th for a 1-up lead that led to the win.

Ancer and Oosthuizen had the powerful American duo on the ropes early by winning four straight holes, all with birdies, to go 4 up through fives holes. Even for being early in the session, the big lead reverberated around Royal Melbourne, with vice captains sharing the news with the groups ahead. Johnson's birdie on No. 8 cut the deficit to 3 up, but the Americans got no closer. The biggest moment was on the par-4 11th when Johnson drove the green to just inside 4 feet. He missed the eagle putt, and Ancer rolled in a 12-foot birdie putt to halve the hole and remain 3 up. Ancer's birdie on the 13th restored the lead to 4 up, and they closed out the match two holes later.