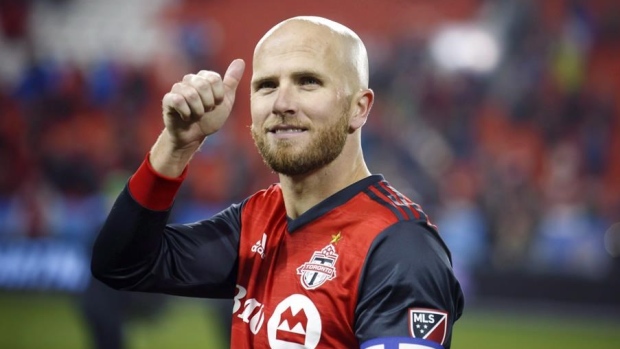 TORONTO — With captain Michael Bradley taking a multimillion-dollar hometown discount on his new contract, Toronto FC now has the funds and the opening to sign a marquee attacking talent.

The MLS club already has whittled down its list of possible designated players to three or four. While Bradley met the media Thursday to discuss his new deal — which covers three years plus a club option — GM Ali Curtis and coach Greg Vanney were away scouting talent in South America.

Curtis heads to Europe this weekend with team president Bill Manning set to join him next week.

"We hope to have conclusion to a new DP before we break (training) camp and even earlier," said Manning.

Bradley is the latest — and biggest — TFC domino to fall into place. The 32-year-old midfielder, who made US$39 million over the six-year contract that expired after the 2019 season, will see his salary drop to $1.53 million from $6.5 million next season.

TFC re-signed Bradley using targeted allocation money, a salary cap mechanism established to bring top players into the league without using a designated player spot (clubs are allowed three DPs). While there is no limit to what DPs can get paid, the maximum salary under TAM rules is $1.53 million.

"We look at it like we have four DPs," said Manning.

Bradley had said money was not a driving force at this stage of his career. He lived up to his word Thursday.

"Playing here, winning here, it means more," he said as wife Amanda looked on at BMO Field. "It's pretty simple.

"The highs are higher and the lows are lower. But when you spill your heart and your soul into something every single day, the emotion of that, that part is so special. For me, my family, what the club, the city means to us — in the end, this was the only place I wanted to be."

In a video prior to his news conference, Bradley got kudos from fellow captains John Tavares of the Maple Leafs and Kyle Lowry of the Raptors as well as Argos icon Pinball Clemons and Mayor John Tory.

Bradley ranked second only to Zlatan Ibrahimovic in MLS pay in 2019. His new salary would rank 31st on the 2019 chart.

"I believe there's other teams that would have paid him some DP salary," said Manning. "And he made the decision that he wanted to continue the journey here, with his family. And he's made it crystal clear, he wants to continue to compete for championships.

"This past year showed he can still play at an extremely high level."

Manning said Bradley's only question in agreeing to take a TAM deal was would the club use what he had given up to sign a new DP. The answer was yes.

At the top end of the scale is the designated player, whose salary carries a maximum salary budget charge of $530,000 no matter how much they make. Striker Jozy Altidore ($6.33 million) and Spanish playmaker Alejandro Pozuelo ($3.8 million) were Toronto's other DPs last season.

Manning said the club will have done its major business once it settles on a new DP. Other signings will likely be depth pieces or role players.

Former New England forward Juan Agudelo was picked up in the re-entry draft but it is doubtful the two will come to terms given he made $605,000 last season.

A defensive midfielder, Bradley helped drag the franchise out of the doldrums after coming on board in 2014. He restored order on the field while changing the mentality off it. Bradley sets the tone and the standard for the Reds.

Manning believes Toronto will be well positioned to add to that total next season, anticipating there will be none of the turmoil that rocked the club earlier this year when Sebastian Giovinco and Victor Vazquez left unexpectedly for greener pastures and Dutch defender Gregory van der Wiel departed after a training camp bust-up with Vanney.

It took a while to replace them, slowing the team's progress before it came on in the second half of the season and mounted a playoff run that ended last month in a 3-1 loss to Seattle in the MLS Cup final.

Bradley made his 200th appearance for Toronto FC in all competitions last month at the MLS Cup final, won 3-1 by Seattle. He is the third player in club history to have made 200 appearances for Toronto FC, joining Osorio and fullback Justin Morrow.

Bradley has 13 goals and 28 assists across all competitions for Toronto FC and is the only TFC player to take part in every minute of every MLS playoff game in club history.

Manning said the club contract option could also involves Bradley staying on in a non-playing role.

Bradley, his wife and two kids have made Toronto their year-round home and he uses every occasion to talk up the city.

Bradley also praised the city for its love of sports, recalling Giovinco's surprise at the fervour of Toronto fans during the 2016 playoff run.

"His English wasn't perfect at that point but he looked at me and (said) 'This is unbelievable.' He said 'If Toronto had a lawn bowling team and they made the playoffs, this city would be on fire.'"

"The point is spot on," Bradley added.

This report by The Canadian Press was first published Nov. 12, 2019.