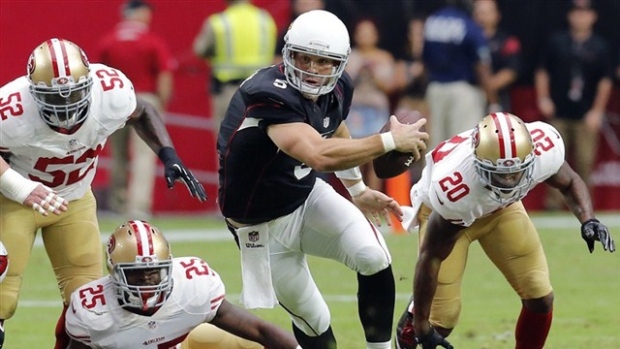 TEMPE, Ariz. - Arizona quarterback Drew Stanton said he has improved every day and is hopeful he will be cleared to play in the Cardinals' game Sunday against the Washington Redskins.

Speaking to reporters for the first time this week, Stanton said after Thursday's practice that he is symptom free and hopes to pass tests on Friday that would clear him to play.

Stanton sustained a concussion in last Sunday's loss at Denver. The status of quarterback Carson Palmer remains uncertain as he works his way back from an injured nerve in his throwing shoulder.

If Stanton and Palmer can't play, the start would go to rookie Logan Thomas.

"There's a lot of questions in our quarterback room right now," Stanton said.

Stanton said that the test he took on Wednesday still found him "lagging" in some areas.

But asked if he thought he had a chance to play Sunday, Stanton said "without a doubt."

"I don't know about chances-wise or percentages or anything like that, but I've improved every day. That's the big thing," he said. "I've felt more comfortable with everything — being around light and not feeling dizzy or any of that stuff, being able to focus and concentrate, so hopefully tomorrow will be another step forward in that process and we can go from there."

For the first time since he was hurt, Stanton was cleared for non-contact activity on Thursday.

He said he "just loosened up, kind of moved around, threw, went through the game plan stuff, just got a feel for everything. It was my first day of really kind of diving into it."

Palmer, who was listed as limited in practice on Thursday, went down in the season opener with a nerve injury in his throwing shoulder, and Stanton has started the three games since. He helped the team beat the New York Giants and San Francisco before last Sunday's loss to the Broncos.

Thomas, a fourth-round draft pick out of Virginia Tech, played in the fourth quarter of that game, completing one of eight passes, but that one completion went 81 yards, to Andre Ellington, for a touchdown.

In case Stanton and Palmer can't go on Sunday, Arizona signed quarterback Dennis Dixon to the practice squad earlier in the week. Dixon would back up Thomas if that's necessary.