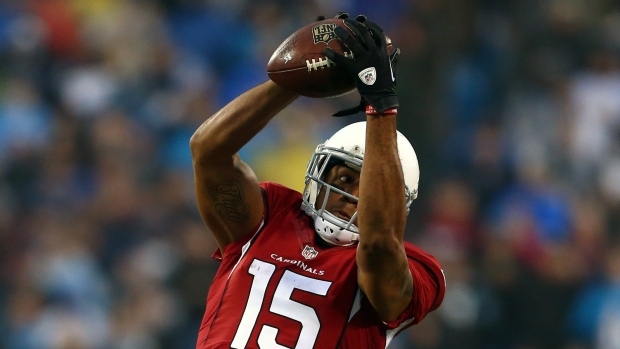 GLENDALE, Ariz. - Arizona Cardinals wide receiver Michael Floyd says he has no timetable for his return from surgery to repair his dislocated fingers but hopes he's back for the Sept. 13 season opener.

Speaking to reporters for the first time since the surgery, Floyd said after the team's Tuesday workout that he plans to watch the practices closely while he's hurt.

"Staying in the books, my iPad, and also being engaged in practice," he said, "making sure I can do whatever I can to be mentally focused in practice, also to help the younger guys."

"My hand got caught under the ball," he said. "As I was turning, my weight shifted to my hand and I didn't roll over quick enough and I think it got caught in the grass. ... I don't think it hurt as much as it was just shocking to see once I took my glove off and realized what was under there."

Asked what he saw, he said, "Things not in the right place, things going left and right."

He underwent surgery that night, but first he sent many of his teammates a picture of his damaged fingers. Floyd said most of them told him they wished he hadn't shown them.

For now, he said, all he is doing with the fingers is squeezing them on Styrofoam, but he plans to start cardio work as soon as possible.

"I don't have that many details," he said when asked what was done to repair the injury. "All I know is it feels good right now and it's just a process of making sure I get the strength in my fingers and get out there as soon as possible."

He said he hopes he won't have to wear any extra protection on his hand.

"Being a receiver, you don't want anything besides your gloves on your hands," he said.

Floyd, entering his fourth NFL after being drafted by Arizona in the first round out of Notre Dame, said he thinks "90 per cent" of getting back will be mental.

"It's just about staying positive about the whole incident," he said. "Try to get back out there and do everything you can to get you there as soon as possible."

Shortly after his surgery, Floyd sent an Instagram photo of him smiling from his hospital bed with a little stuffed bear on his shoulder.

"One of the nurses put that in there," he said. "I find the most positive thing you can do now is take a picture with a bear."