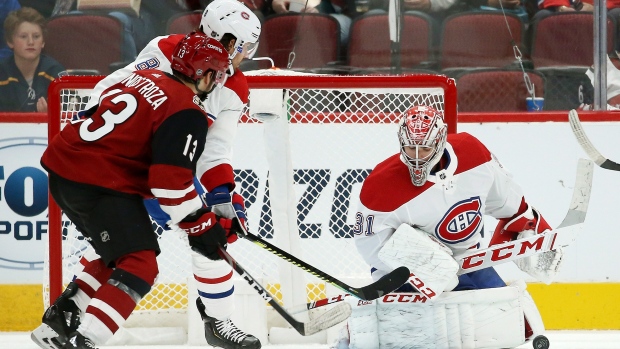 GLENDALE, Ariz. — The Montreal Canadiens arrived in the desert a day early and had an extra jump in their step.

The Arizona Coyotes had a day off following a long road trip and laboured from the start.

The result was predictable.

Carey Price stopped 33 shots, Brendan Gallagher and Shea Weber scored in the opening minute of the first two periods, and the Montreal Canadiens rolled to a 4-1 win over the Arizona Coyotes on Wednesday night.

"Those goals at the start of periods are huge," Gallagher said after his 500th NHL game. "We know what those are like when they go against us and to get those, it carries over to the rest of the periods."

Montreal got to town early for an extra day of practice and acclimation after beating Toronto 5-2 on Saturday.

The Canadiens scored on their first shift in each of the first two periods. Jonathan Drouin added his third goal in two games, Nick Cousins also scored and Price was superb as usual against Arizona, improving to 12-1 all-time.

"There's always going to be something you have to tweak and that's an area we spoke to our team about, starting and finishing strong," Montreal coach Claude Julien said.

Arizona fell behind as fans were still getting to their seats and never recovered, dropping to 7-2-1 in its last 10 games.

Jakob Chychrun scored for the Coyotes and Antti Raanta made 32 saves, giving up one goal when his skate blade fell off.

"The road trip was pretty good to us, then we came home and got some humble pie," forward Derek Stepan said.

The Coyotes had a successful road trip back East, winning three of four, but didn't get back from Buffalo until Tuesday.

Arizona was sluggish in its first home game in 11 days, giving up Gallagher's goal and plenty of pressure by the Canadiens.

The Coyotes were better late in the opening period, but got a bad break early in the second when Raanta's skate blade broke off. Weber scored from near the blue line as Arizona's goalie desperately tried diving back as his blade lay on the ice.

"Those are killers," Coyotes coach Rick Tocchet said. "You can't give up freebies to Carey Price. He's too good a goalie."

Cousins made it 3-0 early in the third period, one-timing a nifty pass through the crease by Nick Suzuki.

Chychrun scored on a similar feed from Phil Kessel.

Drouin was credited with a goal when Coyotes defenceman Jason Demers accidentally swiped the puck into his own net on a mishit shot.

"We're going to have some of these spots throughout the year. This is going to happen again," Tocchet said. "We're going to be in a tough spot and we can't just say well, this is our schedule, it's this or it's that. I don't care what it is, we can't use it as an excuse."

NOTES: C Brad Richardson missed his third straight game and Jordan Oesterle his sixth straight, each with an upper-body injury. The Coyotes hope to have both back soon. ... Gallagher has five goals and three assists in his past eight games. ... Montreal is 19-8-4 against the Coyotes since they moved from Winnipeg in 1996.

Montreal plays at Vegas on Thursday.