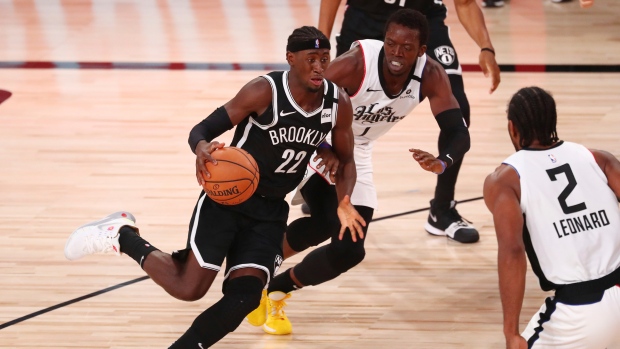 He was eager to meet his new teammates, join the starting lineup and make his Pacers debut. Then came the shocking news from Indiana's team doctors: They found a small mass on LeVert's left kidney.

Suddenly everything went on hold and now, as LeVert awaits test results to find out if the growth is cancerous, the 6-foot-6 guard realizes just how fortunate he was to be included in last week's blockbuster trade.

“I hadn't missed any games this season yet. I was 100% healthy," he said during a video call Tuesday. “In a way this trade showed and revealed what was going on in my body. So I’m definitely looking at it from that side and definitely humbled to know that that this trade could have saved me in the long run."

If he hadn't gone from Brooklyn to Houston in the James Harden deal, then from the Rockets to Indiana in exchange for Victor Oladipo last Wednesday, it's unclear when — or if — the mass would have been detected.

LeVert spent his first 4 1/2 seasons with the Nets after the Pacers selected him in the first round of the 2016 NBA draft. After a solid rookie season, his scoring average increased each of the next three seasons and this season started as his best yet. He was averaging 18.5 points, a career high 6.0 assists and a career best 4.3 rebounds prior to the trade.

Though teams conduct physicals at the start of each season, LeVert wasn't sure if the Nets ever scanned his lower back. That changed when he joined the Pacers, who came up with a diagnosis LeVert never expected.

“A lot of things creeped through my mind," he said. “I really didn’t know what was going on. I didn't know the next steps, I didn’t know if the trade was going to go through. Obviously, it did and I think that’s a testament to this organization and not only how good of people they are but how much they believe in me. That was huge for me. I just can't wait to get healthy and get back on the court."

When that will be nobody yet knows. And until LeVert does return, first-year coach Nate Bjorkgren will be dealing with a short-handed roster.

LeVert was expected to replace Oladipo in the lineup and help add scoring punch with T.J. Warren out indefinitely after having surgery for a stress fracture in his left foot. While Bjorkgren said he's hopeful the Pacers' top scorer from last season returns, he acknowledged the front office continues to work on a rehab plan.

Centre Myles Turner, the NBA blocks leader, went down last weekend with a fractured right hand. Team officials said surgery won't be necessary and listed Turner as day to day. It's possible Turner could play Wednesday night against Dallas with some extra padding protecting the hand.

“He could have very easily sat on this, sat out two or three weeks and no way — he’s not having any of it," Bjorkgren said. “He told me he was practicing today. He’s been saying this for two or three days since that happened. So I appreciate the toughness and the persistence he has."

The good news is guard Jeremy Lamb's return could give Indiana another scorer. He hasn't played since tearing the anterior cruciate ligament in his left knee last February but has been practicing and Bjorkgren said he expects Lamb back “very soon.”

And if LeVert makes it back, well, the Pacers could be near full strength perhaps in time for the playoffs.

But, for now, LeVert has pushed those hopes to the side so he can focus on getting healthy enough to make it back onto the court.

“To me, the most important thing is to get my body healthy and make sure I live a long life," he said. “I'm not really looking at that (basketball) side of things right now. Obviously, I want to play as soon as possible. I’m a competitor. I love to play the game. But I think health wise, that's the most important thing. As far as time line, we’ll figure that out in the future, but right now we just don't have those answers."