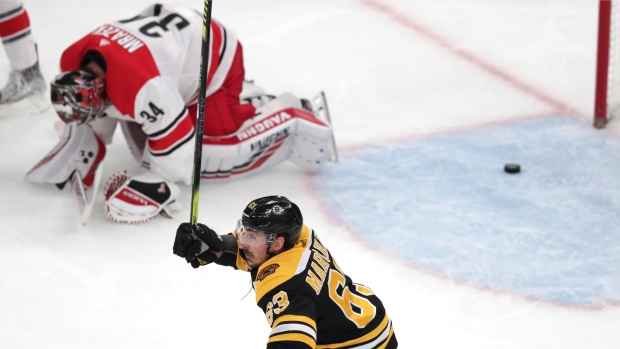 Down 2-0 in the Eastern Conference final, Carolina Hurricanes head coach Rod Brind'Amour is keeping his starter in Game 3 against the Boston Bruins under wraps.

"I can't be that guy that does that, right? I know who we're starting, but I guess you'll have to wait and see. Sorry," Brind'Amour said Tuesday.

The head coach said Monday he hadn't yet made a final choice on who would start the game.

Petr Mrazek returned to the crease for Games 1 and 2 after missing the final two games of the second round with a lower-body injury, but he has allowed 10 goals on 52 shots against the Bruins.

Curtis McElhinney has a 3-0 record this postseason after filling in for the injured Mrazek in the second round against the New York Islanders. He boasts a .947 save percentage with a 1.56 goals-against average.

"Actually, it's an easy decision," Brind'Amour said Monday, per NHL.com. "I know we talk about it a lot, and I know it would be easy if I just said, 'Here is who we're starting,' but we're confident in any way we go. Do we make a change? We might. But that might be for different reasons than you guys think. We'll know tomorrow."

"It's just one game and it's the playoffs, so you play for the win," Mrazek said. "Sometimes when you lose 1-0 it bothers you more than when you lose 6-2."

McElhinney, meanwhile, voiced his support for the team's starter in the playoffs.

"Anytime you have a tough game where you kind of get shelled a little bit, the mentality is you want to bounce back in the next one," McElhinney said. "[Petr] is a competitive guy. You can see that in the way he plays and the emotion he shows on the ice. If anything, he just wants to get back out there."