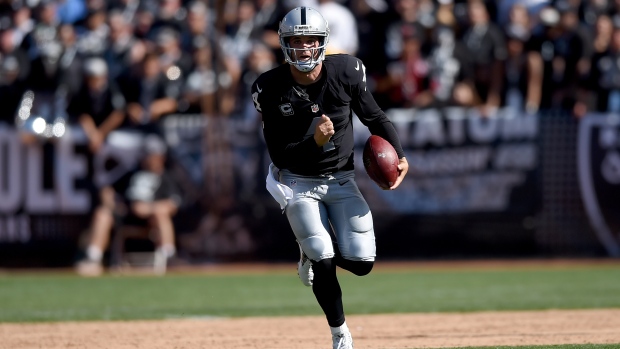 ALAMEDA, Calif. - The Oakland Raiders have spent most of the past decade searching for big-play options at quarterback, running back and receiver.

Three weeks into this season, it looks as if they have finally found them in Derek Carr, Latavius Murray and Amari Cooper. The three are home-grown emerging stars who have quickly gone from unproven draft picks to possible foundation pieces for the rebuilding franchise.

With Carr and Cooper developing into a dynamic passing duo and Murray's game-breaking speed as a runner, the Raiders (2-1) are off to their best start in four years.

"It's an exciting thing," Carr said Wednesday. "We set a standard of what we want to be, and we're not even close yet. We have so much more to do, but we have the blueprint laid out for us. We've seen it work these last two weeks. We just have to continue."

After a lopsided loss to open the season, the Raiders gave notice that they could be in for a turnaround this season when Carr engineered a late touchdown drive to upset Baltimore at home in Week 2. A deep touchdown pass to Cooper started the offensive breakthrough that game and it just continued last week against Cleveland.

Carr threw for 314 yards for his second straight 300-yard passing game, Cooper had 134 yards receiving and Murray ran for 139 yards as Oakland won back-to-back games for the first time in three years.

It was the most combined yards passing, rushing and receiving by a trio of players 25 and younger in NFL history. The Raiders became just the 11th team to have players so young reach 300 yards passing, 100 yards receiving and 100 yards rushing in a single game, according to FootballPerspective.com.

"That little stat we had was pretty cool," Murray said. "I think there's so much room for improvement. Needless to say it's exciting going forward because I think we're just scratching the surface."

Carr has built on an up-and-down rookie season to play his best football yet the past two weeks. Murray, after sitting out the first year and a half of his career, is showing that his late-season spark last season was no fluke.

For Cooper, success has come more quickly. He joined DeSean Jackson as the only receivers to top 100 yards in two of their first three games over the past 30 years and his 290 yards receiving are the third most ever for a rookie in his first three games.

Cooper has shown the ability to get deep, as well as turn short passes into big gains. His 177 yards after the catch are the most of any receiver in the league this year.

"He's a home run waiting to happen," Carr said. "We saw it obviously these last two games. He takes the little in route, stiff arms a Pro Bowl guy and he's off to the races. ... We all think he's going to score any time he touches the ball. He was a top five pick for a reason. I can tell you I'm thankful he's on our team."

The Raiders are quite happy to have all three. Head coach Jack Del Rio coached against Carr twice last season as Denver defensive co-ordinator. He knew Carr had great talent but he's been especially impressed by his desire to learn all the nuances of protections and pressure packages to give him a deeper understanding of the offence.

That knowledge has helped Carr become the least frequently sacked quarterback in the NFL this season with his one sack coming on a scramble when he stepped out of bounds for no gain.

"You come in, you're not sure of what you're getting." Del Rio said. "You hear good things, but to see him approach it that way, I think that's good for us, because having been around some real good ones, being around Peyton (Manning) the last three years in Denver, you see the guys that really attack it and how they approach it and the work ethic that it takes and the commitment that it takes."