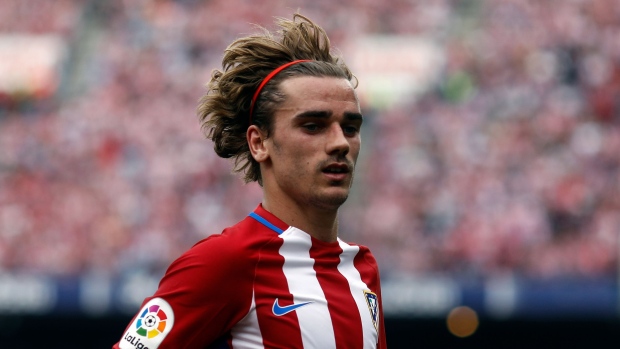 The FIFA ban prevents Atletico from registering new players until January. Atletico had lined up Lyon forward Alexandre Lacazette as a potential replacement for Griezmann.

"Now more than ever," Griezmann said on his social media platforms, alongside the Atleti hashtag and a picture of him in the club jersey, while not directly referencing his future. He also used the hashtag "all together."

Griezmann last week publicly declared he could join United in the summer transfer window, rating his chances as being six out of ten in an interview. Atletico can still sell Griezmann, with United having been ready to pay a release clause in his contract reportedly of more than 100 million euros ($112 million).

FIFA imposed a one-year ban on Atletico last year for signing dozens of youth players in breach of rules that prevent international child trafficking and luring youngsters from their home country.

"This ruling is unfair and causes an irreparable damage to our club," Atletico said in a statement.

Atletico denied wrongdoing, though it agreed not to sign players in the January transfer window while its appeal at CAS went ahead.

"With this decision, FIFA considers that CAS has shown once again clear and strong support for FIFA's efforts to protect underage players," the world soccer body said in a statement.

Atletico would have to cope with only its existing players through the group stage of the Champions League and first half of the league season before it could add to its squad.

Atletico joins Barcelona and Real Madrid in serving transfer bans after signing youngsters from around the world. Those signings were all approved by the Spanish soccer federation, which is led by longtime FIFA vice-president Angel Maria Villar.

The CAS judging panel acknowledged that "not all of the alleged violations of the FIFA regulations concerning the registration of minor players could be upheld."

Two of the three-man CAS panel in Atletico's case also sat in judgment of Barcelona's appeal in 2014 — and reached the same conclusion.

When Real Madrid's one-year transfer ban was halved last December — clearing the club to sign players this off-season — its appeal was heard by a single CAS judge.

Atletico made a pointed reference to its local rival's lighter judgment in its statement Thursday. Claiming it had received "discriminatory treatment," Atletico noted that "recently and in a similar case, the penalty was partially lifted."

Although the FIFA sanction is typically called a "transfer ban," it is technically a block on registering new players.

Atletico can sign new players this off-season but they could not play in a competitive match until January.

When Barcelona served a one-year FIFA ban in 2015 it still signed Arda Turan in the off-season from Atletico. The Turkey midfielder was then sidelined for several months before making his debut in January 2016.

Atletico target Lacazette has a "verbal agreement" to move to Madrid, Lyon said two weeks ago.

Another reported deal that could be at risk is Tottenham's interest in Kevin Gameiro, another France forward at Atletico. Gameiro signed for Atletico one year ago when the club stocked up after successfully getting the FIFA sanction frozen during the appeal process.