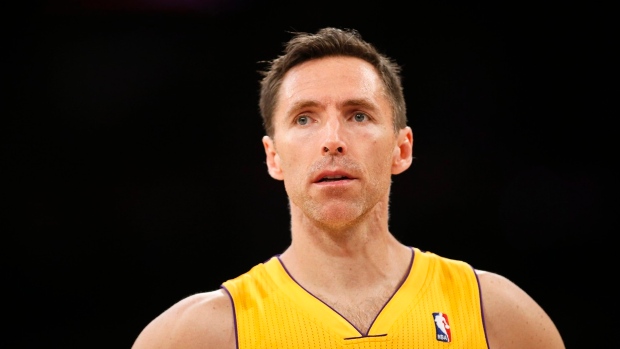 TORONTO -- Dwane Casey never had the pleasure of coaching Steve Nash, but admired the Canadian's game from afar.

The Toronto Raptors hosted the New York Knicks on Sunday, but thoughts were on Nash prior to tip-off, a day after the face of Canadian basketball announced his retirement in an eloquent letter.

"(I appreciated) his unselfish play, the way he plays pass-first. Just his overall demeanour, he's a good man. His heart is in the right place. He's about the team, he's about winning. There is not a selfish bone in his body," Casey said.

Casey, who was an assistant in Dallas before coming to Toronto, said a lot of what he knew of Nash came from Nash's good friend and former teammate Dirk Nowitzki. The Mavericks forward "loved" Nash, Casey said.

"The stories I heard in Dallas. . . how he helped keep Dirk's confidence up when they were two 'stiffs' so to speak coming into the league," Casey said. "They kept each other going and kept their confidence up going back in late at night. (Dallas owner Mark) Cuban will tell you that was one of his biggest mistakes -- letting Nash walk out the door (to the Phoenix Suns)."

Nash's announcement wasn't surprising -- the veteran point guard had played in just 65 games over the last three seasons with the Los Angeles Lakers due to injuries. Back and nerve issues prevented the 41-year-old from hitting the court at all in what would have been his 19th NBA season.

Fisher also paid tribute to Nash on Sunday, calling the two-time NBA MVP from Victoria a great example of how far "high character" and hard work can take you.

"I think a lot of today's players come into the league expecting to play and feeling entitled to opportunity," Fisher said. "If you look back at Steve's career he wasn't given that back at the beginning. . . It was remarkable the career he put together, the success he had individually and how he led his teams.

"I think he should be extremely proud of what he has done."