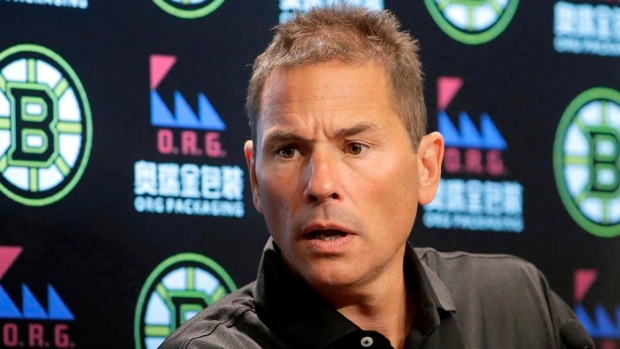 BOSTON — Bruce Cassidy went nearly 14 years between NHL head coaching gigs. Some believed Craig Berube might never get another shot after being fired in Philadelphia in 2015.

One man will walk out of TD Garden on Wednesday night forever known as the coach of a Stanley Cup champion.

Who would have thought?

This wasn’t even how Cassidy played it out hundreds of times growing up on Coldrey Avenue in Ottawa’s west end.

“Like a lot of kids, I was Bobby Orr,” Cassidy said Tuesday. “If I didn’t score and we lost Game 7, we played it again. Middle of winter or middle of summer, it didn’t matter. I never imagined myself coaching; I’m not going to lie. Here I am. It’s the next best thing.”

This is a Stanley Cup final story of second chances – and what a coaching matchup it has been. Berube and Cassidy both have their fingerprints all over these playoff runs.

Cassidy seems to have the Midas touch, while Berube has pushed all the right buttons.

The beauty of this final is it’s a chess match without any of the pretense.

These are two coaches from the old school. There are no mind games, no I’m-not-telling-you-my-lineup changes and very little running around to shield lines from matching. It’s just my best against your best, let’s go.

“May the best team win,” Cassidy said of Game 7.

More refreshing than their shared frank and honest nature has been their journey to this moment.

Berube could follow his assistant – nine-time Cup winner Larry Robinson – as only the second interim coach to guide his team to the Stanley Cup (Robinson took the New Jersey Devils to a championship in 2000). The man known as “Chief” from Calahoo, Alta., took over for Mike Yeo on Nov. 19.

Blues GM Doug Armstrong continued to interview coaching candidates for a month with Berube on the bench. The interim tag was never removed as the Blues climbed from 31st place on Jan. 3 to third place in the Central Division. Armstrong finally admitted in May that the Blues are now “down to one” candidate for the job.

“We were looking outside at potential candidates, whether it be major junior, Europe, the NHL, the American Hockey League,” Armstrong said on May 10. “And as I started to work with Craig, whatever name was on the candidate list started to get crossed off and crossed off. Now we’re at a list of one.”

Berube, 53, was named a finalist for the Jack Adams Award alongside Jon Cooper and Barry Trotz. He was out of hockey four seasons ago and fuelled this turnaround with a team built on mental toughness.

Cassidy, 54, was a finalist for the Jack Adams last season in his first full year behind the Bruins’ bench. The argument could be made that the credit for the Bruins’ turnaround from rebuild candidate to contender belongs to Cassidy and not GM Don Sweeney. This is largely the same core – minus Charlie McAvoy and a few young pieces – that missed the playoffs in 2015 and 2016.

Cassidy’s resume looked like alphabet soup from the time he was fired by the Capitals as a 38-year-old after two years at the helm on Dec. 3, 2003. He assisted Trent Yawney for one season in Chicago, was head coach for the OHL’s Kingston Frontenacs, then went back to AHL Providence as an assistant coach for three seasons before being promoted to head guy of the Baby Bruins in 2011-12.

Cassidy said he always hoped he would get another chance, but wasn’t sure. He was ready for it.

“If you want to get back, you got to do things differently,” Cassidy said. “For me, part of that was how I communicated my message, I believe. I’ve learned to be better with it. You're a little bit older, better balance, you know, in my life overall. It makes you a little more patient with players as well.”

Sweeney got a first-hand glimpse of that growth, working closely with Cassidy in Providence while he was the Bruins’ assistant GM.

“Him having the opportunity to do it at the NHL level is really just a testament to what he has done as a person and as a coach,” Sweeney said. “I believed in it, I knew that his ability to adapt and make decisions in-game would be really beneficial to us as an organization, especially when you’re implementing younger players.”

Both coaches’ ability to adapt has been on full display.

Cassidy, known as a power play savant, was the one who picked apart the Blues’ penalty kill ahead of the Game 3 romp. He then added centre Karson Kuhlman to the lineup in Game 6 when it would’ve been easy to just go back to David Backes after dressing seven defencemen in Game 5.

Kuhlman hadn’t played since April 30, but he scored Boston’s third goal to help save their season and force Game 7. He was Boston’s 21st scorer this postseason, tied for the most all-time with the Flyers team Berube skated for in 1987.

“It happened to work out tonight,” Cassidy said of Kuhlman. “He was a good add.”

Cassidy would probably say Berube’s biggest impact came via the public complaints he made about the officiating earlier in the series. But his big change of the playoffs was moving Brayden Schenn back to play with Jaden Schwartz against the Winnipeg Jets in Round 1. That third-period swap produced a game-winning charge, then two more hat tricks from Schwartz.

The Blues are the first team to have two players suspended in one Stanley Cup final, but Berube has adjusted accordingly. Zach Sanford was subbed in for the suspended Oskar Sundqvist and has changed the look of Ryan O’Reilly’s line.

Berube will have to decide whether Ivan Barbashev should play in place of Robert Thomas or Sammy Blais in Game 7. Cassidy will have to weigh whether Chris Wagner or Matt Grzelcyk is ready to return.

All that’s riding on the line is a chance to listen to Gloria or Dirty Water and a championship that no one can take away.