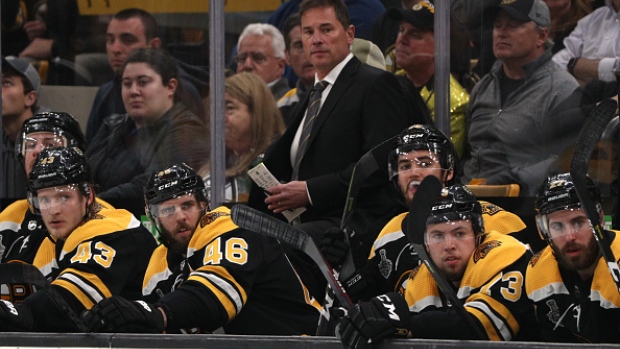 BOSTON - The morning after Bruce Cassidy said officiating has given these NHL playoffs a “black eye,” the Bruins’ coach turned the turned the conversation back to his team.

The blown calls haven’t helped, but the Bruins need to be better.

“Our play should define us, not a call,” Cassidy said Friday. “I didn’t push the right buttons. We didn’t generate enough offence to win the game.”

Before that admission Cassidy’s comments served as a Band-Aid, covering up the Bruins’ shortcomings in this Stanley Cup final.

Blues centre Ryan O’Reilly has singlehandedly outscored the Bruins’ top line by a 3-0 margin at even strength in the series. Brad Marchand netted an empty-net goal in Game 1; Patrice Bergeron and David Pastrnak both scored on the power play in Game 3.

Speaking of which, that once-lethal Bruins’ power play suddenly has a power outage. Boston is 0-for-5 in the last two games. When you take out the perfect 4-for-4 night that won Game 3, the Bruins are just 2-for-15 on the series.

In other words, even if referee Kelly Sutherland whistled Tyler Bozak for the “egregious” trip on Noel Acciari – as Cassidy called it – that occurred right in front of him, there was no guarantee the Bruins would be one win closer to the Stanley Cup than St. Louis.

It just rubbed salt in the wound.

“My feeling about it hasn’t changed,” Cassidy said Friday. “I thought it was a missed call that impacted the game in a negative way for us.”

The other missed call may result in a suspension. Blues forward Ivan Barbashev will have a hearing on Friday with the NHL’s Department of Player Safety for his check to the head of Marcus Johansson that went unpenalized.

Barbashev cleanly picked Johansson’s head with his shoulder, not unlike the hit Boston defenceman Charlie McAvoy made on Columbus winger Josh Anderson in Round 2 that cost him one game.

The pendulum has swung both ways in these playoffs. The Bruins have felt both end of the NHL’s scales of justice: McAvoy skirted a game-changing major penalty for that hit on Anderson; Bozak’s trip went uncalled by the same referee in Game 5.

The NHL opted not to fine Cassidy for his postgame criticism of the officiating. Other coaches have been fined for less, especially since Cassidy alleged that the officials changed their approach to the series based on Craig Berube’s earlier complaints about calls.

“I mean, the narrative changed after Game 3,” Cassidy said after Game 5. “There’s a complaint or whatever put forth by the opposition. It just seems to have changed everything.”

The practice of coaches lobbying officials through the media and in pre-game meetings with the series supervisor is practically as old as the Stanley Cup itself.

Heck, the difference in officiating between the regular season and playoffs is why these two “heavy” teams have a leg up in the postseason anyway. Both teams play right on the line.

“We play a hard game,” Berube said Thursday. “We’re a physical team. We forecheck hard. I’ll say it again: We are the least penalized team in the playoffs. End of story. I don’t need to talk any more about it.”

Cassidy had his say, too, and is now moving on.

As far as fixing what ails the Bruins, Cassidy had three things on his agenda for practice on Saturday. He wanted to focus on how the Bruins can better “finish some plays” in the offensive zone. He will look at adjustments for the power play that has “kind of gotten stuck.” Solving St. Louis’ riddle at the blueline on entries is the other.

“I thought they did a good job of forcing us to one side,” Cassidy said. “We’ve got to be quicker in identifying that, because we’re not partial to one side – we’ve got Marchy on one side and Pasta on the other.”

In the Stanley Cup playoffs, energy is at a premium - and the Bruins spent way too much of it thinking and talking about a missed call that they can’t change.

The focus is back now where it should be: on the ice.

“The emotion now is we’ve got to put it behind us and we’ve got to win Game 6,” Cassidy said. “That’s what’s in front of us. That’s what the mindset is today … Every player is probably frustrated for their own reason. So let’s get them out of their own way, breathe, and just play.”