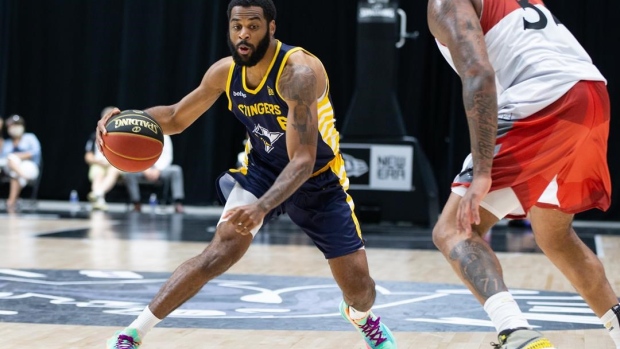 The Edmonton Stingers flew to Nicaragua on Friday with one major goal in mind — to prove Canadian pro basketball is as good as any league in the Americas not named NBA.

"It's (only) the fourth season the CEBL has been running, and being able to put a team into the Champions League, and be a part of it means a lot," said guard Adika Peter-McNeilly, a 28-year-old from Toronto.

"We have some great basketball players in Canada and so it's putting our league on the worldwide map, we’re building something here that's creating recognition of it."

The team is actually a collaborative CEBL effort. Stingers head coach Jermaine Small, who's compiled a 32-4 record in two-and-a-half seasons with Edmonton and led the Stingers to back-to-back CEBL titles, added a couple of CEBL rival coaches to his staff: Charles Dube-Brais, head coach for the Ottawa Blackjacks, and Niagara River Lions head coach and GM Vic Raso.

"I'm very excited to be part of it," Dube-Brais said. "Just to have that opportunity to join forces … The CEBL needs all of us to push it forward. And I think that the league putting this together so that we can go and participate in the BCLA, and then to say, 'Hey, we're going to take some coaches from the league, and we're going to combine and join forces to push this thing forward, that's really exciting."

The FIBA-sanctioned BCLA was founded in 2019 and features the best pro clubs from North, Central and South America and Latin America. The Stingers will be back on the court Tuesday against Cangrejeros of Puerto Rico.

The group stage sees 12 teams across four divisions, with each team playing its opponents three times, once in each window. The Stingers play again in Puerto Rico in early February. Calgary will host the third window in mid-March.

"It's huge. We deserve to be out there," Dube-Brais said. "I left Canada (to coach) in 2009 because there wasn't really what I was looking for. I felt it was unfortunate there was professional basketball pretty much everywhere, but not in Canada or not at a level where you think it should be with the level of talent that we have over here."

The CEBL began play in 2019 with six teams. It now has 10 teams, with franchises in Scarborough, Montreal and Newfoundland recently joining.

"I think that the next step was to participate in those continental championships," Dube-Brais said. "The fact that we are right now shows that FIBA has taken us seriously and world is taking us seriously, now when you talk about Canadian basketball and the CEBL overseas, they know what you're talking about. That's very encouraging."

Raso said he jumped at the chance to be on Small's staff.

"Of course, I want to be here to help," he said. "I talk to agents and players and coaches all the time … and the (CEBL) is starting to build momentum, we're a FIBA league that can compete with the best leagues in the world, best summer leagues specifically. And now we get to represent Canada at a real FIBA competition."

Since the CEBL is a summer league, and many of its players are currently scattered around various pro winter leagues abroad, the Stingers roster that will play Monday in Esteli features just two members — Peter-McNeilly and former Ryerson Rams teammate Jahmal Jones — of its Stingers championship roster.

Peter-McNeilly, who played professionally in Germany after leaving Ryerson, said the CEBL provides great opportunities for Canadians to stay home.

"I can't even put into words," said Peter-McNeilly, who won the CEBL's sixth man award in 2021. "You play overseas, and you see how established those leagues are and how they take care of their players. So having a league in your own home, and they’re taking care of the Canadian players, and you're able to play in front of family and friends all the time, that just means a lot.

"You're going to play against guys that you played against growing up, in house league and high school and university, and then to be able to play pro and show the next generation that: You know what? You guys can play in this league. You don't have to go overseas, you can stay home and be a professional basketball player."

The top two teams from each of the four groups advance to the best-of-three quarterfinals.