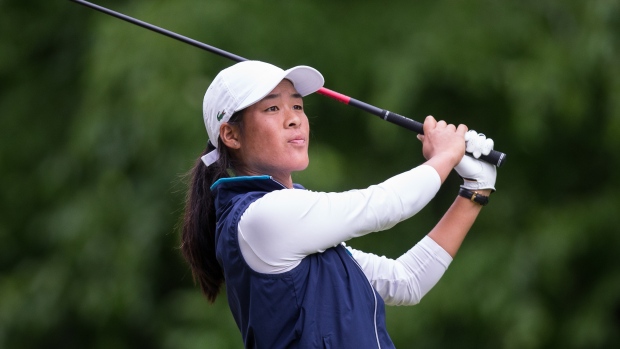 NAPLES, Fla. — What looked to be a wide-open race for the richest prize in women's golf is now in the hands of Celine Boutier, who made seven birdies over the last 10 holes for a 7-under 65 and a four-shot lead Friday in the CME Group Tour Championship.

For so much of the wind-blown second round, a dozen or so players were separated by one shot at Tiburon Golf Club. That included Nelly Korda and Jin Young Ko, four-time winners this year in a battle for LPGA player of the year.

Over the final two hours, Boutier left them all in her wake in the chase for the $1.5 million prize.

Among her seven birdies, the 28-year-old from France chipped in from short of the green on the 13th, stuffed her approach to four feet behind the hole on the 15th, reached the middle of the green on the par-5 17th in two for an easy birdie and closed with a 7-foot birdie putt.

Brooke Henderson of Smiths Falls, Ont., is 11 shots off the pace in a group tied for 39th.

“I was frustrated with my front. I left a couple of shots out there,” Boutier said. “My long game was really solid all day, and I was able to put my shots close, and it was helpful on the back.”

Korda, who has a 10-point lead over Ko in the race for player of the year, was in the group five shots behind after having to settle for a 69.

The 23-year-old American star was right there in the mix until she was slowed by one swing. She went for the green on the par-5 14th and it peeled to the right on her, just inside the hazard line. Korda still had a swing, but her punch shot didn't make it up the slope, and she failed to get up-and-down from there to take bogey.

“I just hit it a little heely and it just floated out to the right,” Korda said. “That’s usually my miss. The ball is above your feet. I was trying to be a little aggressive with it, and my misses have been a little left, so I kind of lifted up and hit it out to the right.”

Ko had a 67 and was in the group six shots behind. More relevant to player of the year, Ko was two shots away from a chance to finish second, which she has to do for any chance to capture player of the year for the second time, and even that depends on how Korda fares.

Going into the weekend of the season finale, they're all chasing Boutier.

Much like the way she finished her round, Boutier is all about the big finish. An ordinary year turned memorable over the last two months. It started at the Solheim Cup where a 5-and-4 singles victory over Harigae — with whom she played Friday — helped Europe win the cup.

Boutier returned home after the Solheim Cup and won the French Open, and then two weeks later closed with a 63 to beat Ko and Inbee Park in the ShopRite Classic for her second career LPGA title.

“I feel like my game has been solid, just a little inconsistent with putting. That's what was costing me. I changed my putter in September and since then,” she said, pausing to smile, “it's gotten better.”

Boutier's 66 matched the low score of the second round. Danielle Kang also had a 66.

It was a different Tiburon from the day before, when a soft rain and virtually no wind led to 18 players posting 67 or better. This was more like Florida in the fall, with a steady wind that was relentless and strong enough to make players uncomfortable over shots at times.

Lexi Thompson is still a factor, one week after she wasted a chance to end more than two years without winning by finishing bogey-bogey and losing in a playoff. She won at Tiburon two years ago and it plays into her strength of being able to overpower courses.

Thompson says she is working tirelessly on her putting — she chose not to say who is helping her with her short game — and put bad memories behind her. She had a few tap-in birdies to atone for two bogeys in her round of 69 to reach 8-under 136.

“Just going to take the positives from last week and take it into this week. This is a week that I look forward to the most out of the year,” Thompson said. “Two more days, so I'm going to embrace it all.”