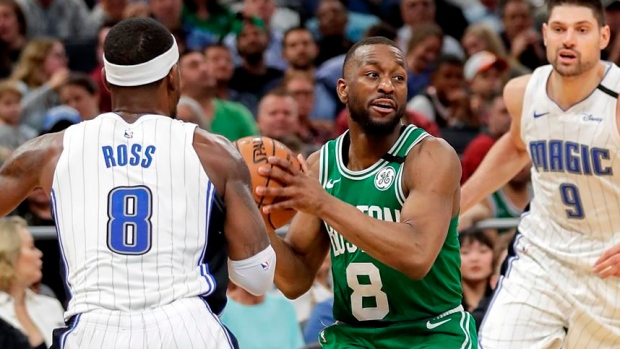 ORLANDO, Fla. — The Boston Celtics were missing a lot of starters. They still had the two they needed: Kemba Walker and Gordon Hayward

Walker scored 37 points and Hayward added 22 to help the Celtics rally from a 16-point first-half deficit and defeat the Orlando Magic 109-98 on Friday night.

“You have to focus even more so when guys are out to do your job as well as you can,” Celtics coach Brad Stevens said. “That’s what good teams do. You have to play with that kind of effort and do the little things that win games.”

Walker scored 19 of his points in the second quarter, when the Celtics faced a 46-30 deficit. The Celtics point guard single-handedly kept a disorganized offence from digging too deep a hole by hitting 10 of 16 shots in the first half, including four 3-pointers.

“I thought (Walker) gave us everything he had in the first half and we were worried (whether) he would have much left,” Stevens said. “It was up to everyone else to take it to another level at that point and fortunately we did.”

Evan Fournier led Orlando with 30 points, but he had little help in the fourth quarter when his teammates combined to shoot 3 of 11 and commit three turnovers. Nikola Vucevic finished with 17 points and 12 rebounds, and Aaron Gordon was the only other player in double figures with 12 points.

Walker didn’t score in the third period, but Hayward and the aggressive defence were enough to allow Boston to pull away.

Hayward scored 12 points, grabbed eight rebounds and had four assists as Boston wiped out the 16-point deficit and took an 82-77 lead into the fourth quarter. Boston expanded it lead to 95-81 when Walker drilled his sixth 3-pointer of the game with 8:46 to go.

“Obviously, we had some of our top scorers out, so I tried to be more aggressive,” Hayward said. “I always try to be a playmaker and help the bigs out on the boards.”

Meanwhile, the Celtics defence disrupted the Magic's offence on nearly every possession. Orlando was just 14 of 43 (32.6%) in the second half and had only six assists on those 14 baskets.

“At the end of the day, if you’re going to beat that team, you’re going to have to play through contact, not turn the ball over and have clean possessions,” Magic coach Steve Clifford said. “It takes offensive energy and force and we had none of that.”

Still, Fournier’s shooting helped Orlando cut the deficit to 103-98 when Terrence Ross nailed a 3-pointer with 2:29 to play, but the Magic didn’t score the rest of the game. Boston picked up the pace considerably on defence in the second half. The Celtics limited Orlando to just 7 of 25 shooting (28%) in the third quarter, outscoring the Magic 29-20 to take an 82-77 lead. Walker didn’t score in that quarter, but the Celtics didn’t need him as Boston started to spread its scoring around.

Walker nailed his sixth 3-pointer of the game to put Boston up 95-81 with 8:46 left and then it was a matter of holding on.

Orlando got 12 points from Fournier and Terrence Ross hit a 3-pointer to close the gap to 103-98 with 2:29 to play, but the Magic went scoreless the rest of the game.

Celtics: F Jayson Tatum (groin), G Jaylen Brown (ankle) and C Enes Kanter (hip) were all out. … At one point in the first half, Kemba Walker had outscored the rest of the Celtics 25-18.

Celtics: at New Orleans on Sunday.