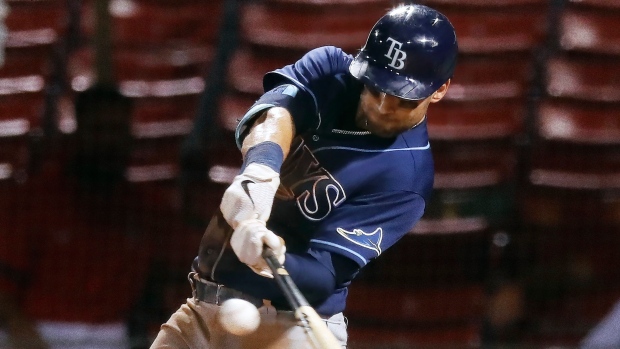 The 30-year-old defensive whiz, set to make $11.5 million in 2021, was the subject of weeks of trade speculation this winter following the team’s loss in the World Series. He's grateful to still be the face of the franchise in spring training.

“I wasn’t walking on eggshells saying, ‘Oh, this might be my last day.’ ... But I’d be lying if I didn’t say some thoughts crept in my mind here or there,” Kiermaier said following a workout in Port Charlotte, Florida.

“I’m thrilled to be here. I don’t want to be anywhere else,” the three-time Gold Glove centre fielder said. “I know how the business side of things work. Seeing my name in trade speculation felt more real than ever.”

So much so that at one point Kiermaier reached out to general manager Erik Neander, who says it's important to treat any player who might be the subject of such talks with an “appropriate amount of respect” as the Rays go about their business.

One of the keys to Tampa Bay’s ability to remain competitive while being outspent by most teams has been a penchant for making shrewd trades with an eye on the future, stockpiling promising young talent and keeping the payroll relatively low.

While the Rays didn’t receive an offer for Kiermaier that Neander felt was too good to resist, the club did make a major move in trading 2018 AL Cy Young Award winner Blake Snell to the San Diego Padres.

“We have a certain formula for how we do things getting talent, giving away talent to get talent. ... It's hard to go against what Erik Neander, the front office, management, and what those guys have done. We put out a great roster each and every year,” Kiermaier said.

“It’s tough to see a great talent like Blake walk away, but the guys we’re bringing in, it’s hard not to be excited about that,” the outfielder added. “We have such great depth in our organization that there’s no reason to panic.”

A .248 career hitter, Kiermaier is coming off a productive post-season in which he homered once against the New York Yankees in the AL Divisional Series and twice against the Los Angeles Dodgers while batting .368 in the World Series. He's under contract through at least 2022, with Tampa Bay holding a $13 million club option for 2023 that includes a $2.5 million buyout.

Although his greatest value to the Rays is as the centerpiece of one of baseball's top defences, manager Kevin Cash stressed Kiermaier continues to evolve as a hitter — even if his batting average, or where he hits in the lineup, doesn’t always reflect that.

“I think KK, year by year, is kind of learning what makes him good and how he is able to complement the rest of our lineup. ... I think he’s finally recognizing that him being one of the nine in the batting order is more than enough to play his role,” Cash said.

Kiermaier, who turns 31 in April, is just ecstatic to be preparing to help the Rays defend the AL pennant.

“I was a little worried at times. This is an organization that has given me the world,” the centre fielder said. “I’ve loved every second I’ve been here, and I’m happy to still be here.”