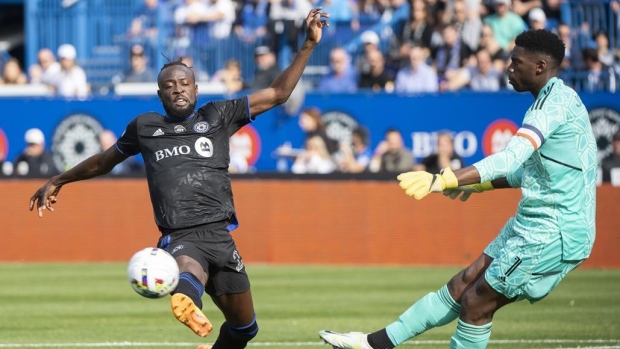 The Sierra Leone international, who said in a Jan. 11 social media post that he wanted to move on from the Major League Soccer club, did not do any work with the team on Friday.

Instead, he focused on a series of running exercises along with fellow striker Mason Toye, who has been taking preventive measures in training since feeling tightness in his leg earlier this week.

Kamara was not available to the media but, while the front office is disappointed in the way this has played out, he's still part of the club in the eyes of some of his teammates.

"We gave him a bit of a hard time about all this and cracked some jokes, but at the end of the day, he’s under contract and he’s our teammate." said goalkeeper James Pantemis. "The work he does both on the field and in the locker room are so crucial. His experience and leadership are huge for us and a lot of the younger guys."

Kamara was picked up as a free agent at the beginning of the 2022 season and scored nine goals and added eight assists in 39 appearances over in all competitions en route to being nominated for the MLS Comeback Player of the Year Award.

Despite being tied for second on the team in goals he made US$94,000 last season, which ranked 25th among Montreal players.

Pantemis, meanwhile, has emerged as the clear starting goalkeeper for Montreal after competing for the spot with Sebastian Breza last season. With Breza returning to Italy after his loan spell in Montreal, Pantemis is becoming one of the team’s veteran players, having been with the club since 2017 aside from a six-month loan to the Canadian Premier League’s Valour FC.

He has taken it upon himself to welcome am influx of new players, including fellow Greek Canadian Ilias Iliadis, who recently moved from Greek club Panathinaikos’ reserve team.

Among those new arrivals is fullback Aaron Herrera, who will be counted on to reinforce the right side of the defence. Herrera was acquired from Real Salt Lake in exchange for US$500,000 in General Allocation Money (GAM) split across the next two seasons, a 2023 international roster spot, and Montréal’s 25th overall pick in this year’s MLS SuperDraft.

“As anyone would, the first day was complete shock,” said Herrera about receiving the news of his trade. “I was with Salt Lake for about 10 years, but after that sort of set in it was mostly just excitement.”

Herrera spent five years in Salt Lake City evolving into a versatile defender whose delivery was his greatest strength. In the 2021 MLS season, Herrera led all defenders with 11 assists.

Canadian international Alistair Johnston was Montreal's prime distributor from defence before departing for Scottish giants Celtic. Herrera was singled out as the kind of energetic and versatile defender that could help fill the gap left by Johnston, who was named the club's defensive player of the year in 2022.

“There’s definitely pressure, but I’m not trying to replace him,” said Herrera. “I’m doing my best to become one of the best outside backs in the league. (Head coach Hernan Losada) knows I can play anywhere along the back line so I’m sure that’s what I’ll be doing this year.”

Montreal has completed half of its pre-season camp before heading to Florida on Feb. 5 in order to put the finishing touches on their preparations for their season opener against Inter Miami on Feb. 25.

This report by The Canadian Press was first published Jan. 20, 2023.