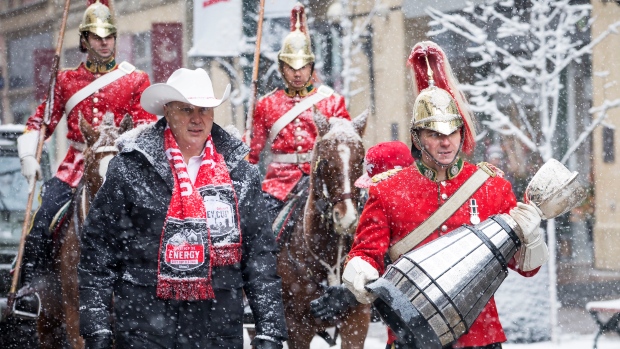 CALGARY — CFL commissioner Randy Ambrosie was long on optimism for the league's future Friday, but short on substance regarding cures for what ails it.

Ambrosie held a wide-ranging discussion with reporters in his third state-of-the-league address. He gushed about the potential of CFL 2.0 — the league's initiative to grow football globally. But he could only express confidence that two major issues — franchise sales in Montreal and B.C., which have both seen talks drag on throughout the season — would be resolved in the coming weeks.

Ambrosie was unapologetic about focusing on what he's continually said is a bright future for the three-down game in Canada.

"I'll never, ever apologize for being the biggest cheerleader for this league," he said emphatically. "I couldn't imagine a more important purpose for the person who occupies this role.

"To believe in its future and to promote this great game and our players and coaches. We're no longer the much smaller of two (football leagues), we're the second-best of many. Get used to that idea. It's time for some good old-fashioned CFL swagger."

On Sunday, Ambrosie will present the Grey Cup to either the Hamilton Tiger-Cats or Winnipeg Blue Bombers at McMahon Stadium.

It was the unbridled enthusiasm and Ambrosie's pleasant demeanour that endeared him to the media his first two years on the job. But 2019 has been challenging for Ambrosie, beginning with often contentious collective bargaining talks with the CFL Players' Association that eventually resulted in a three-year deal just prior to the start of training camp.

Then there's the ongoing saga that is the Montreal Alouettes sale. The CFL took over the franchise from American businessman Robert Wetenhall on May 31 while actively searching for a new ownership group.

Many had been mentioned but nothing has been finalized. CFL sources have suggested Montreal natives Peter and Jeffrey Lenkov — who are both based in California — head up a partnership that includes Claridge Investment Ltd., a Montreal private investment firm.

The sources have been granted anonymity because the CFL has not revealed the names in the group it is negotiating with on the sale.

The Montreal ownership issue wasn't the CFL's lone challenge this year. Others included:

— Dwindling attendance in Toronto and smaller crowds across the CFL.

— The CFL awarding the Saskatchewan Roughriders a shortened road win over Montreal in a game called after the third quarter due to weather.

— A slow-moving process on a stadium being built in Halifax to anchor Schooner Sports and Entertainment's bid for a CFL expansion franchise for the Maritimes.

Essentially, many of the problems Ambrosie inherited still remain. But a broadcast agreement isn't one of them as the CFL and TSN reached a new multi-year deal Thursday.

The move was essential to the CFL, considering there's no way the league could move forward without it.

Meanwhile, Ambrosie has continued to aggressively spearhead the CFL 2.0 initiative. After signing an agreement with Mexico's Liga de Futbol Americano Professional during Grey Cup week in Edmonton last year, Ambrosie has secured partnerships with 10 other international football associations and plans to hold a series of global combines in Europe, Mexico and Japan.

"It was, without a doubt, a different year of the three I've had in this role," Ambrosie said. "Sometimes you're doing the things you want to do and that's really the forward-looking things . . . and it's so exciting and you get to spend a lot of your personal energy on that.

Ambrosie said the CFL must work on improving its relationship with the CFLPA.

"I've been talking to our Players' Association friends on a way to embrace them in our 2.0 strategy . . . and make them a part of it," he said. "We want our players to do better, we want them to make more money, we want them to have a better future for their families.

"There's a way to do this if we only put our heads together."

It was another tough season for the CFL in Toronto. The Argonauts (4-14) missed the playoffs for the second straight year and again were plagued by poor attendance, attracting less than 10,000 spectators for one game at BMO Field.

Yet Ambrosie said he feels good about the franchise's future under the ownership of Maple Leaf Sports and Entertainment.

Ambrosie also feels it's crucial for the CFL to grow the game nationally at the youth level. On Thursday, the league and Football Canada unveiled CFL Futures, a new development program for youth between the ages of eight and 13.

"This is one of the most critical aspects of our plan, to get more kids playing the game," Ambrosie said. "And if you don't think it's important then you're missing something because football is different than another sport.

"It's the most inclusive game, it's the game every kid can play. Every kid can go to a football field and find a home on a team."

Ambrosie added it's important for the CFL to also attract new Canadians.

"We're about inclusion and the most welcoming nation on the planet," he said. "That approach . . . will pay handsome dividends in the years ahead.

"This is Canada. What's happening in Calgary this week is Canada. This league stands for everything that's good about this country."