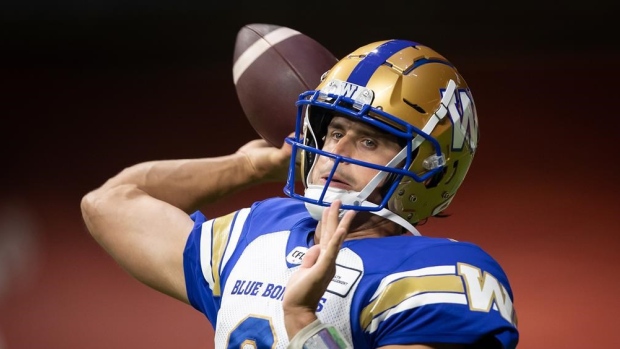 This week, he takes a closer look at whether the Winnipeg Blue Bombers can continue their dominance versus the Edmonton Elks on Friday night, and how weather could impact Saturday’s game between the Montreal Alouettes and the Ottawa Redblacks.

It’s never easy to defeat an opponent in back-to-back weeks, let alone three times in just under a month.

However, the Winnipeg Blue Bombers aren’t your ordinary football team.

The Bombers have reeled off six straight victories, and their past five wins have all been by a margin of at least 15 points.

After eschewing Trevor Harris to the sideline this week, the Edmonton Elks are relying on rookie quarterback Taylor Cornelius to lead the charge for their struggling offence.

Consider this familiar territory for Cornelius as he failed to throw a touchdown pass versus three interceptions in his Week 7 CFL debut against the Bombers.

Unfortunately for the former Oklahoma State Cowboy, his second start against the league’s top defence will be just as difficult.

Playmakers abound for the Elks, but the most eye-opening stat for Edmonton this season involves the team’s star receivers’ inability to find the end zone.

Greg Ellingson and Derel Walker have combined for just one touchdown. That’s a far cry from what was expected when they entered a promising 2021 campaign.

Given the Bombers’ exceptional ability to pressure the quarterback and create turnovers (a league-leading 28 takeaways through Week 10), I would anticipate that Cornelius’ time under centre won’t last the full 60 minutes.

We will likely see Dakota Prukop at some point, and as such, I see the Bombers rolling to a seventh consecutive win this week in Edmonton.

The Picks: Winnipeg -12 and Taylor Cornelius under 20.5 completions

Heavy rainfall is expected all day Saturday in the nation’s capital, which will surely play a role in altering the game plans for both the Montreal Alouettes and the Ottawa Redblacks.

The weather will make it tough to grip the football, so don’t expect the offences to be marching up and down the field putting up big scoring totals.

Much like their hotly contested battle on Thanksgiving Day in Montreal, these two bitter rivals will once again duke it out in a one-possession game.

On Monday, the Alouettes were lucky to escape with a 20-16 victory on the strength of Matthew Shiltz’s first career game-winning drive in place of an injured Vernon Adams Jr.

Despite their relative inexperience, both quarterbacks have proven to be more than capable of leading their offences.

Unfortunately, this week the weather will affect their ability to execute efficiently and will result in another close game that will ultimately come down to the wire.

Take the Redblacks and the under in this one.