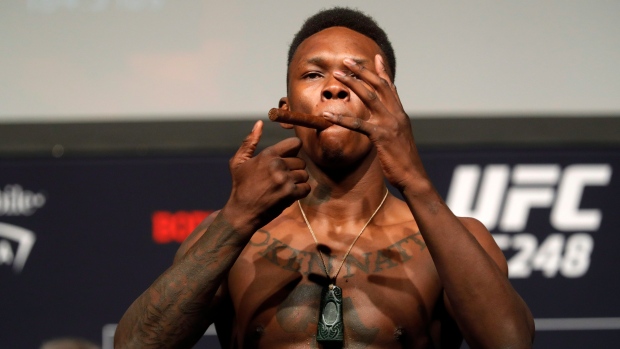 After Israel Adesanya finally took up mixed martial arts full-time three years ago, he rocketed through the UFC ranks with a thrilling, athletic style of fighting. He even became an undisputed champion in just his 18th professional bout.

But a few days before the coronavirus pandemic upended the sporting world, Adesanya looked nothing like a superstar in his first title defence.

Six months after his desultory win over Yoel Romero in Las Vegas, Adesanya (19-0, 14 KOs) is on the other side of the globe to defend his middleweight belt against longtime antagonist Paulo Costa (13-0, 11 KOs) in the main event of UFC 253 on Fight Island in Abu Dhabi on Sunday.

Adesanya couldn't seize the spotlight against Romero, but he vows to amaze the world against Costa, another musclebound opponent who seems a challenging target for Adesanya's otherworldly striking ability.

“I feel like that was the valley of my story, and now it’s time to rise again,” Adesanya said. “This is my time, and this one is going to shoot me into the stratosphere.”

At UFC 248 in March, a patient, boring performance against a nearly inert Romero kept the Nigeria-born, New Zealand-based Adesanya from taking the quantum leap to international stardom that he and the UFC expected.

Instead, the voluble champion spent more time explaining why he hadn't thrilled his fans — and sparring with Costa, who jumped at the chance to needle Adesanya on social media.

Adesanya's chance at redemption comes against another unbeaten contender whose rise in the UFC has been even quicker. The supremely powerful Costa needed only five UFC bouts to earn a title shot, although the Brazilian was nearly 26 when he joined the promotion.

Costa and Adesanya have sparred online, but been polite when they meet in person, according to both fighters — yet they go right back to trash-talking each other when they part.

“He’s insecure,” Adesanya said of Costa. “That’s why we’re fighting each other. We get to fight. Someone that you’ve been barking at behind the fence, when you see them, what do you do? ... I’ve just said I don’t like the guy, and I don’t like the way he looks. It’s never personal, but the difference is I get to settle it this weekend.”

The main event is the most attractive fight on the card at UFC 253, the first of five consecutive UFC shows in its secure bubble in the Middle East.

In the co-main event, Dominick Reyes takes on Jan Blachowicz for the light heavyweight title belt vacated by Jon Jones, who beat Reyes when they fought earlier this year. Jones has said he probably will move up to heavyweight for his next bout, although he hasn't booked a fight.

All four title contenders made weight for their bouts Friday in Abu Dhabi, while featherweights Zubaira Tukhugov and Ludovit Klein both came in 4 pounds heavy for their respective bouts. Both fighters will be fined a portion of their purses, with the two fights still going on at a 150-pound catchweight.

Adesanya excels at the verbal business of fight promotion along with his skills inside the cage, and he hasn’t backed down from Costa’s declarations that the champion is an overhyped, underskilled athletic freak who can’t handle truly physical 185-pound fighters. If Adesanya can back up his words with a highlight-reel victory, that leap to stardom should be a small hop.

The lantern-jawed Costa is a daunting challenge for anyone, however. He has stopped 12 of his 13 MMA opponents by knockout or submission, with only Romero taking him the distance in their spectacular slugfest in August 2019. Costa has been inactive since then, waiting for his title shot.

Costa’s power seems even more dangerous than Romero’s famous punching prowess, but Costa doesn’t rely solely on waiting for a counterpunching opportunity. Adesanya will undoubtedly be forced to fight, and Costa thinks the champ won't be able to handle it.

“I have a lot of power, so I feel like I can finish this fight anytime I want to,” Costa said. “He’s fake. He’s a good actor, but a fake guy.”