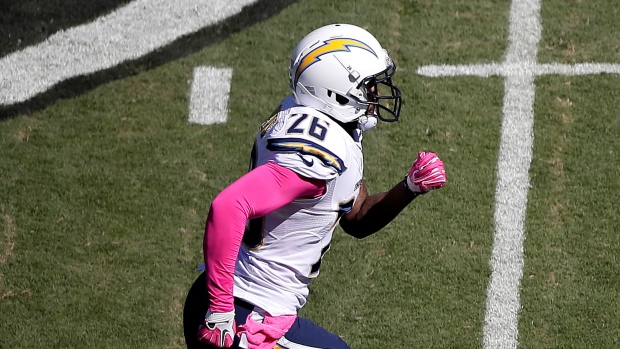 Flowers left last Sunday's 31-28 win over the Oakland Raiders with a groin injury. Friday was the first time Flowers tested it this week.

"I just moved around a little bit, did the individual drills and got through them," said Flowers, who's listed as questionable for Sunday.

But Flowers said he won't know until Sunday morning if he's able to compete.

"If I'm out there that means I'm good enough to play," said Flowers, who missed the Sept. 14 game with the same injury. "If not, I wasn't able to go."

Flowers, who leads the Chargers with two interceptions, played in Kansas City before signing as a free agent last off-season. He was looking forward to battling his former squad.

"I thought it would be fun," Flowers said. "I never got a chance to play an old team before, so definitely it would be fun to go out there and play against the guys I played with for six years."

But what trumps that are Sunday's stakes.

The first-place Chargers (5-1) could drop Kansas City (2-3) 3 1-2 games off the AFC West lead with their sixth straight win.

"I didn't have it circled, but it's a big game," Flowers said. "It's a division opponent and we got to make it happen on Sunday."

Linebacker Jerry Attaochu (hamstring) didn't practice this week and is listed as doubtful.