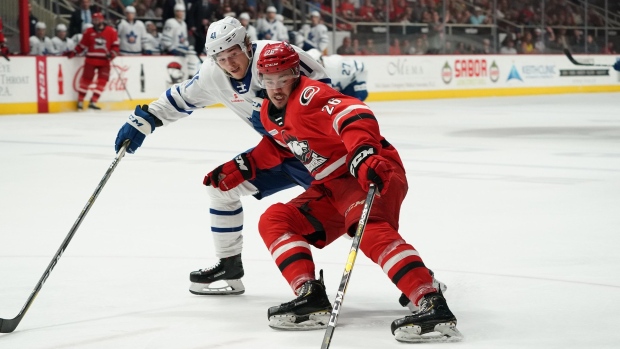 The American Hockey League's Charlotte Checkers announced on Wednesday that their parent club, the Carolina Hurricanes, have not been forthcoming in regards to its expected change of AHL affiliation.

"While we are aware that the Carolina Hurricanes are nearing an affiliation agreement with the AHL’s Chicago Wolves, the Hurricanes have had little dialogue with us regarding this matter," the statement read. "In an era when NHL teams are placing great value on affiliations with closer proximity between the two clubs, we understand the confusion that such a move would cause."

The Checkers, formerly the Albany River Rats, relocated to North Carolina in 2010.

The team won its first Calder Cup in 2019, defeating, coincidentally, the Wolves.

The Wolves had been affiliated with the Vegas Golden Knights, but the club recently purchased the San Antonio Rampage with the intent to move the team to Henderson, NV to become its AHL affiliate.

The Rampage had been the St. Louis Blues' affiliate, but the Blues have since announced a partnership with the Springfield Thunderbirds.

As of right now, the Florida Panthers are the only NHL team without an AHL affiliate.

The Raleigh News & Observer's Luke De Cock reports the Hurricanes could announce their deal with the Wolves as soon as next week.