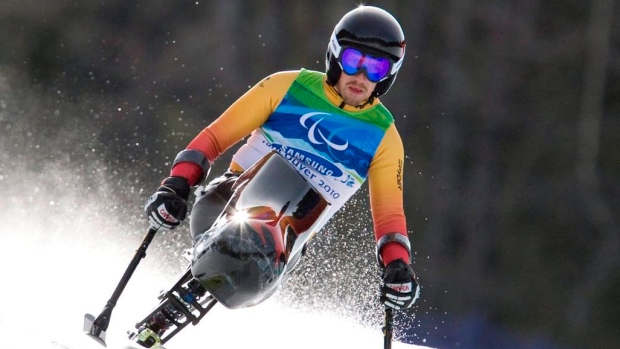 Josh Dueck knows the role of chef de mission for Canada's Paralympic team during these unparalleled times comes with huge and unique challenges.

It's a big reason why the three-time Paralympic medallist wanted the job.

The 39-year-old skier, who was the first person in history to perform a back flip on a sit-ski, was named Canada's chef de mission for the 2022 Beijing Paralympics on Wednesday,

"There's a part of me that likes to get gritty and that wanted the challenge and wanted to be there to insulate and support the athletes the best that I can and I know it's going to be a bit of a turbulent ride," Dueck told The Canadian Press from his Vernon, B.C., home.

The chef de mission, or "head of mission", acts as an ambassador for the entire team leading into and during the Games.

Dueck admitted there was a brief moment of fear when he got the call, "Like oh, what have I done?

"But the last couple of days, I've been like 'I know exactly what I've done, I signed up for a role that I'm meant to be in right now. It's already given me so much drive and renewed sense of purpose."

Dueck, who broke his back in 2004 after overshooting a demonstration jump, captured silver in slalom at the 2010 Vancouver Paralympics, and then gold in combined and silver in downhill four years later in Sochi. He also won gold and silver at the 2014 Winter X Games, and appeared on "The Ellen DeGeneres Show" after the video of his historic back flip hit half a million views.

COVID-19 has posed huge challenges for Canada's athletes training for both this summer's Paralympics in Tokyo and the 2022 Winter Games in Beijing. But athletes, Dueck pointed out, are built to face adversity. They do so countless times throughout their careers.

Dueck likes to find inspiration in Terry Fox, "one of the greatest Canadian heroes of all time." He reads Ann Donegan Johnson's book on Fox called "The Value of Facing a Challenge" to his two kids.

"Our character is forged by the fires that we endure," he said.

"What (Fox's) story really showcases so well is that these challenges forced stress and stress allows for growth, and sometimes in ways that we can't predict, and that we don't want. Like, I don't think anybody wants a pandemic," Dueck said.

In the weeks that followed the cancellation, the Canadian Olympic and Paralympic Committees' message of togetherness amid the global pandemic was: We are all Team Canada.

Dueck was inducted into the Canadian Paralympic Hall of Fame in 2019 and in his induction speech talked about how sport was a dress rehearsal for life, preparing him for "how challenging life can be."

Since retiring in 2014, Dueck lost both parents and a sister. His mom died in the five-day window between what would have been her 50th wedding anniversary and the one-year anniversary of the death of Dueck's sister.

"That complete heartbreak. She was absolutely devastated," Dueck said.

"But my mother-in-law is so awesome, she said 'Oh my god Josh, do you know how proud your parents would be for this (chef de mission position)?'

"That's where my excitement comes from, my parents saw how important sport was for me. And now I get to live it again. And I know this is not about me, but it's going to be a great thing. I'm pretty excited to dive into this wholeheartedly."

The Beijing Paralympics are March 4-13, 2022. Catriona Le May Doan was recently named Canada's chef de mission for the Beijing Olympics.

This report by The Canadian Press was first published Dec. 2, 2020.