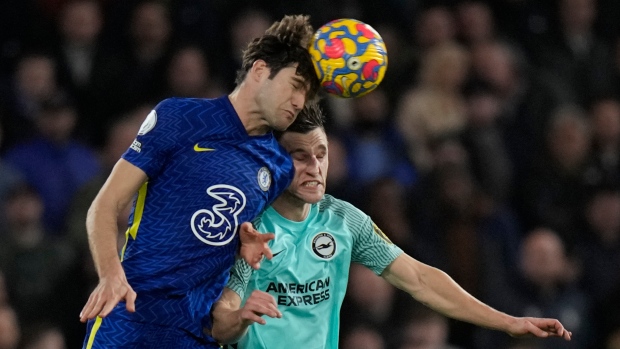 LONDON (AP) — Chelsea dropped more points in the Premier League title race by conceding a stoppage-time goal to Danny Welbeck to draw 1-1 with Brighton on Wednesday.

The draw lifted Chelsea into second place, above Liverpool, but a win was needed to keep in sight of in-form leader Manchester City.

It looked like Chelsea was about to earn three points despite a lackluster display at Stamford Bridge, only for Welbeck -- on as a substitute -- to head home a left-wing cross from Marc Cucurella in the first minute of stoppage time.

Romelu Lukaku scored for the second straight game to put Chelsea in front in the 28th minute, moments after Reece James hobbled off with what appeared a serious leg injury. Chelsea also lost another defender, Andreas Christensen, to injury.

Chelsea has drawn three of its last four games in the league and plays Liverpool on Sunday.