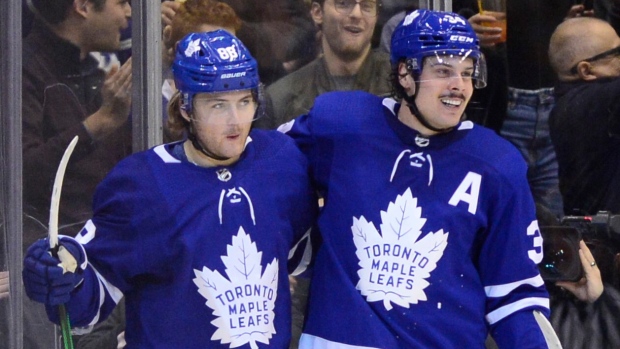 The Maple Leafs held a team meeting at Scotiabank Arena on Saturday. The Blackhawks held an optional skate.

What would it mean for Buffalo native Patrick Kane to reach the 1,000-point milestone tonight?

"It'd be special," said the Blackhawks winger, who has 998 points in 951 NHL games. "I mean, pretty close to home and I played a lot of hockey growing up as a kid in the Toronto-area and in Canada in general so, yeah, it'd be fun to do it tonight. I think it would cap off a pretty special weekend."

Last night, Kane was in London, Ont. watching his No. 88 get raised to the rafters by the Knights. It was a tribute to his one incredible OHL season, but also what he did afterwards.

"You get a little emotional with the video tribute," Kane said. "It's like your career kind of displayed for you right in front of your eyes. It's amazing it's been 13 years, it feels like yesterday I was there, playing there and having a lot of fun playing hockey. I was there one year, but have a lot of memories that could maybe take up four or five years. I just felt the same when I walking in the building, you know, I felt like I was coming back to play a game in that building."

Thank you @GoLondonKnights for a night my family and I will never forget pic.twitter.com/ISWkFZ2USE

The video tribute featured a lot of big goals, including a Stanley Cup clincher in overtime. Kane has a track record of rising to the occasion and meeting the moment so entering the four-digit club in front of family and friends in Toronto would be fitting.

"It's a pretty good stage to get it," agreed Blackhawks coach Jeremy Colliton. "I also think he'd like to get it out of the way."

"I'm almost sick of hearing about it already," said long-time teammate Jonathan Toews with a laugh. "But, no, it is special and it's kind of crazy how fast he’s gotten there. These last three, four, five years, he's just been putting up consistent numbers and even when our team is struggling he's just been out there putting up points and nothing seems to faze him or take him away from that consistent production. So, pretty amazing number for him to get to at this point in his career, will go out there and see if I can help him get it over with and move past that milestone and on to the next thing."

Kane carries an eight-game point streak into tonight's tilt and has at least one point in 11 of Chicago's last 13 games.

The Leafs and Blackhawks have played a series of highly-entertaining games in the four seasons since Auston Matthews and Mitch Marner entered the league. In fact, all seven encounters have been one-goal games with five going beyond regulation. At times it's felt like the stars on both sides were trying to outdo each other. Kane and Matthews, in particular, have stolen the show at times.

"He's a special player," Kane said. "I've been watching him a lot this year and he's so consistent, he brings it every night and he's just so dangerous when he gets the puck so I have a lot of respect for what he's doing this year and in his career. He's such a dynamic player, can score pretty much every time he's on the ice and I have a lot of fun watching him and (Mitch) Marner play together, it's fun hockey to watch."

Kane and Matthews have trained together on the eve of the last couple seasons, which Kane says helps push him to stay ahead of the curve. He is always interested to see how Matthews' game is evolving.

"We saw a lot in the past where he'd come down that left side and kind of shoot the snapshot from that side and now it seems like he's playing the other side and scoring a lot over there too," Kane observed. "You can tell his confidence is high. I think he’s doing some more creative things with the puck … they're creative, but also effective moves and creates scoring chances. You see his confidence building."

"The way he saw the game, I mean, he was the best scoring player of the last decade," Nylander said. "It's the level right there."

The 23-year-old Swede actually changed his sweater number to 88 this season in homage to the three-time Stanley Cup champion.

Kane couldn't help but chuckle when informed of Nylander's admiration.

"I'm in my 13th year so I am getting a little bit older," he said. "He's a great player too, I like watching him. I like watching the way he skates. He's such a good skater, he’s able to elude defenders from just one or two quick turns and his brother is kind of the same way so it’s interesting to watch them both skate. They're pretty special on their edges. I know he kind of grew up in the Chicago area and that's when we were doing well as a team so it’s pretty cool to hear that stuff."

Nylander's younger brother, Alexander, is playing on the same line as Kane and the siblings often discuss what makes the 31-year-old such a talent. So, you can imagine how meaningful tonight is for the elder Nylander brother, who has 10 goals in the last 13 games.

William scored twice on the Blackhawks back on Nov. 10 at the United Center while Alexander was held off the scoresheet. But the Blackhawks won the game. So, who has bragging rights?

"He has it from the last game so we got to get that back," William said with a smile. "Winning is what counts."

The brothers talk basically every day, but these in-person showdowns have taken on more significance since Alexander was traded from division rival Buffalo to the Western Conference.

"Now we only get to play against each other twice a year so it's extra special," Alexander, 21, said. "We're really close. We do a lot of things in the summer and working out and he's a really easy guy to talk to. We can talk about anything."

The Nylander clan had dinner last night and everyone (dad, mom, sisters) will be in the building tonight for the fourth NHL meeting between the brothers. This is only the latest chapter in the sibling rivalry.

"Whatever we were doing whether it was soccer, baseball or whatever it was always a battle," Nylander said. "Ping-pong we would end up in fights. That was a part of it growing up."

This is the final game for the Leafs before their bye week and All-Star break. Nylander and teammates Kasperi Kapanen, Frederik Andersen and Jake Muzzin will be heading out on a dream golf getaway to Augusta National, home of The Masters.

"Muzz is probably the best out of all of us," Nylander said. "We'll try and beat him. It'll be fun. We haven't played in a while so it will be fun to get away and play a course like that. It'll be special."

Cody Ceci is heading to Barbados. Zach Hyman is going to catch up with family. Everyone seems to have their vacation plans locked and loaded.

The Blackhawks, meanwhile, are fighting to stay in the playoff race and still have two games left after tonight before their break.

"It's just a mental task here today just to stay focused," said Leafs coach Sheldon Keefe, who will also be heading south to chase the sun. "We talked about it this morning and I can talk about it all that I want, it's really on them to make the decision that this game is important and it certainly is. We'll talk about it again when they come back for the game tonight and the puck will drop and we'll find out. We certainly hope our team is engaged tonight."

Keefe said a couple players are dealing with issues and will be game-time decisions.

Out since Dec. 19, Brandon Saad returns to the Blackhawks line-up tonight. Dylan Sikura will be scratched. Corey Crawford starts for Chicago.