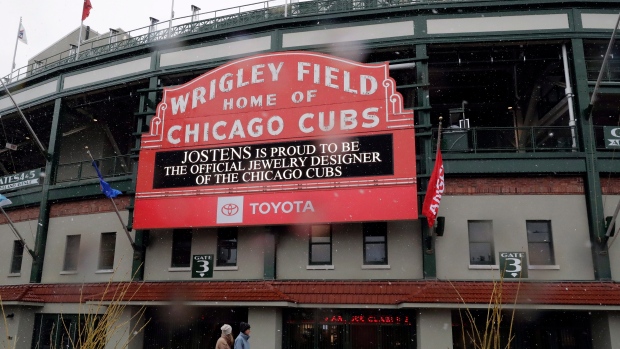 While the window is just opening on Jed Hoyer's time as the Chicago Cubs' president of baseball operations, it's closing on the Cubs' championship-winning core.

The Cubs gave Hoyer a five-year contract on Monday that runs through the 2025 season, one week after his friend and mentor Theo Epstein stepped down as team president. The 46-year-old Hoyer was promoted from general manager to replace Epstein, who oversaw drought-busting championships with both Boston and Chicago.

Hoyer takes over a team in the middle of expensive multiyear deals with outfielder Jason Heyward and starting pitchers Yu Darvish and Kyle Hendricks. And four players who were essential contributors to Chicago's 2016 World Series title — Javier Báez, Kris Bryant, Anthony Rizzo and Kyle Schwarber — all are eligible to become free agents after next season.

“You always have one eye on the present and one eye on the future. Given the service-time realities we mentioned, that eye may be more focused on the future than usual,” Hoyer said Monday. “But that doesn't take away from the goal, and the goal is always to make the playoffs and give this organization an opportunity to go deep into October.”

The Cubs won the NL Central in the pandemic-shortened 2020 season but got swept by Miami in the first round of the playoffs, totalling one run in the two games. Chicago has not won a playoff series since 2017.

Third baseman Bryant has the highest salary among the Cubs' potential free agents and is the most frequent subject of trade rumours. Hoyer declined to predict whether Bryant, coming off a down year, would be on the roster on opening day. But some changes are inevitable, he said.

“On the offensive side, I think we want to look and feel and perform differently than we have the last two years,” Hoyer said. “The thing we're trying to figure out is why we struggle offensively given the players we have, so yeah, I think the offence will look different next year.”

Team chairman Tom Ricketts has spoken about his desire to avoid paying baseball’s luxury tax for high-payroll clubs, and the Cubs — like every team in baseball — face the potential of an ongoing revenue dip caused by the lack of fans because of the coronavirus pandemic. The Cubs — who for decades have enjoyed consistent sellouts at historic, 41,649-seat Wrigley Field — eliminated jobs from both their baseball operations and business departments this fall.

Hoyer said he has discussed budgeting with Ricketts but said there was too much uncertainty to commit to a number.

Ricketts, meanwhile, said he was thrilled to promote Hoyer to a job for which he's highly qualified. Hoyer, who pitched and played shortstop in college at Division III Wesleyan, has spent 17 of the last 19 seasons as a top deputy to Epstein with the Red Sox and Cubs. He also had a two-year stint running the San Diego Padres' baseball operations.

“I don't know that anyone in the history of baseball has turned down as many jobs or job interviews as Jed Hoyer has over the last several years,” Ricketts said.

Hoyer said he will search outside the organization for a new GM. And he said he believes he can retool the roster while keeping the team consistently competitive.

“Given our resources and given our talent level, we should field a team that's a playoff contender every single year,” he said. “I think we can do that and have a team that's positioned long-term as well.”