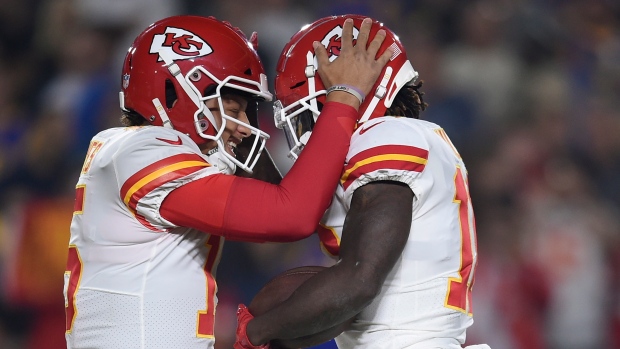 KANSAS CITY, Mo. — The Chiefs could get star wide receiver Tyreek Hill back for Sunday's game against Houston, and quarterback Patrick Mahomes avoided any serious injury to his ankle, though that may be about the end of their positive news on the injury front.

The Chiefs placed defensive tackle Xavier Williams on injured reserve Wednesday after he sustained a high ankle sprain in last weekend's 19-13 loss to the Colts. He was among a handful of crucial players that went down during the game, many of whom could still be out for Week 6.

Left tackle Eric Fisher remains sidelined after core muscle surgery. Defensive tackle Chris Jones, wide receiver Sammy Watkins and offensive lineman Andrew Wylie all missed practice Wednesday after they were hurt during the game against the Colts, and their status for this weekend is murky at best.

Mahomes, meanwhile, was stepped on by left tackle Cameron Erving while planting to throw from his end zone Sunday. The reigning NFL MVP limped to the sideline when the Chiefs were forced to punt in a scene similar to that of Week 1, when Mahomes likewise hurt his ankle in Jacksonville.

That's good news for the Chiefs, who struggled to score for the first time in more than a year against the Colts. Mahomes' inability to escape the pocket was a big reason why their streak of 22 games with at least 26 points came to an end.

"It's not perfect, I guess I should say that," Mahomes said, "but it's good enough that I feel I can still run, cut and do all of that stuff."

It would help his cause to get Hill back on the field.

The two-time All-Pro broke his collarbone when he was driven into the sideline by the Jaguars, and only began to practice last week. The big hurdle for the speedy wide receiver is making sure that the repair can withstand a hard hit, something that he may not know until he gets into a game.

Chiefs coach Andy Reid said Hill will continue to practice but did not say when he would play.

"He did a little bit of everything last week. This is pure how he feels," Reid said. "This isn't a real common injury in the NFL. We're just trying to make sure it's right."

Reid said that the Chiefs' medical staff would evaluate a series of MRIs, along with any other necessary tests, to make sure Hill is available not only this weekend but the rest of the season.

"The guy is full of energy," Chiefs tight end Travis Kelce said, when asked about the possibility of Hill returning this week. "During the game he's hyping everybody up and trying to keep everyone focused and moving forward with positive thoughts, and we love him for it. Even when he's not in the game, he's trying to make an impact for the team."

Hill's return could be even more important given the fact that Watkins, who tried unsuccessfully to play through a hamstring injury against Indianapolis, appears unlikely to play this week.

That continues a trend of the oft-injured wide receiver missing games in Kansas City.

"He felt good going into the game, then when he planted it grabbed on him," Reid said. "But he went through all the warmups, did everything, felt really good, felt good Saturday. One of those things."

The Chiefs also lost middle linebacker Anthony Hitchens, who is responsible for calling the plays on defence, during their game against Indianapolis. But Reid indicated Wednesday that Hitchens would be at practice, and that should help a run defence that was abysmal against the Colts.

Not so helpful are the fact that Williams, a big run-stuffer, and Jones, one of the premier pass-rushing defensive tackles in the game, could be sidelined this weekend.

Throw in the injury to Wylie and the Chiefs were forced to bring in some reinforcements up front, signing veteran defensive tackle Terrell McClain and offensive lineman Stefan Wisniewski.

Reid said that both of them could be ready to play by this weekend.

"I'm learning as fast as I can," said Wisniewski, who played for Reid protege Doug Pederson while in Philadelphia. "Luckily the offence is very similar, so I'm hoping to pick it up pretty fast."

NOTES: Kelce said the sideline confrontation last Sunday with offensive co-ordinator Eric Bieniemy was a heat-of-the-moment argument, and that they had patched things up. "You guys got to understand, me and Coach Bieniemy have a very close relationship," Kelce said. "I love him."