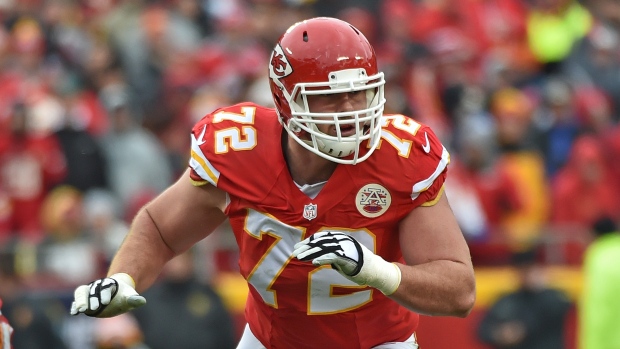 ST. JOSEPH, Mo. — Eric Fisher could be protecting the blind side for Kansas City Chiefs quarterbacks for the next six years.

The Chiefs announced they had signed the left tackle to a contract extension Saturday, the first day veterans such as Fisher joined rookies on the practice field at Missouri Western for training camp.

The Chiefs did not announce terms of the extension, but a person familiar with the negotiations told The Associated Press it was a four-year, $48 million deal that includes $40 million guaranteed. The person spoke on condition of anonymity because the contract terms were confidential.

Fisher is starting the final year of his rookie contract, and the Chiefs exercised their fifth-year option on the former No. 1 overall pick in May. That means Fisher's total deal spans six years and $63 million.

"In three seasons he's grown significantly as a football player in our system," Chiefs general manager John Dorsey said in a statement. "He's a tough, physical presence and a leader on our offensive line. We look forward to keeping him as a part of our organization and community."

The Chiefs hoped that Fisher would develop into a franchise left tackle when they selected him in the 2013 draft out of Central Michigan. But he struggled mightily his first couple years as he adjusted to life in the NFL, and for a while, many Chiefs fans thought that Fisher would turn out to be a bust.

He finally came into his own last season, adeptly protecting quarterback Alex Smith and helping to ensure the Chiefs' run game remained on track even after Jamaal Charles suffered a season-ending knee injury. Fisher started both of the Chiefs' playoff games, helping them win one for the first time since the 1993 season.

"Coach (Andy) Reid's big thing is it all starts in the trenches with O-line, D-line and he'll tell us that before every game," Fisher said during the off-season. "We take that to heart, we've been building this thing for multiple years now and I think we're getting to that point where we're just about there."

The only other first-round pick from the 2013 draft to sign an extension is Eagles offensive tackle Lane Johnson, who in January signed a six-year, $63 million deal with $35.5 million guaranteed.

Fisher's deal means the Chiefs could have the three most prominent spots on the offensive line solidified for the foreseeable future. Mitch Morse is entering his second year at centre after a dazzling rookie season, and the Chiefs signed free-agent right tackle Mitch Schwartz to a five-year, $33 million deal in March.