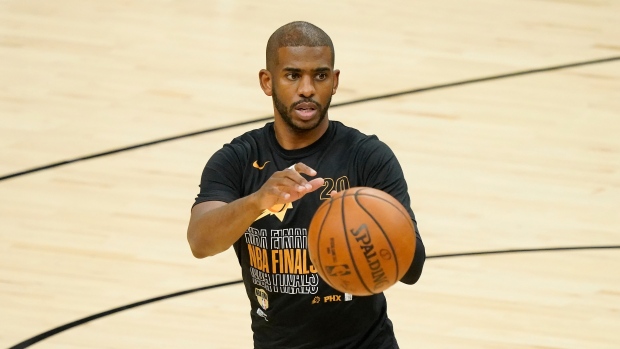 Phoenix Suns All-Star guard Chris Paul has agreed to stay with the Western Conference champions, agreeing to a new four-year deal that could be worth as much as $120 million, his agents Steve Heumann and Ty Sullivan told ESPN on Monday.

The 16-year NBA veteran averaged 21.8 points on 54.4 percent shooting and 8.2 assists per game for the Suns during the NBA Finals, in losing to the Milwaukee Bucks.

Paul is expected to be ready for the start of training camp next season after having left wrist surgery, a source told Marc J. Spears of ESPN's The Undefeated on Monday. Paul had the surgery after the NBA Finals, the source said. The 36-year-old was seen wearing tape on his left wrist during the 2020 NBA Finals.

Paul, who declined his $44 million player option for next season before the new deal was agreed to, is an 11-time All-Star coming off a season in which he averaged 16.4 points on 49.9 percent shooting (39.5 percent from 3), 8.9 assists and 1.4 steals per game.

He won't get too many more bites at the apple, so this decision could very well determine if he'll finish his career with an NBA title or not.

Following the Suns' Game 6 loss in the NBA Finals, Paul seemingly hinted at interest in staying in Phoenix to help the Suns get over the hump. Clearly, he meant it.

"I think for me, I just look at myself and figure out how can I get better, what I could have done more and make sure I come back next season ready to do it again," he said.