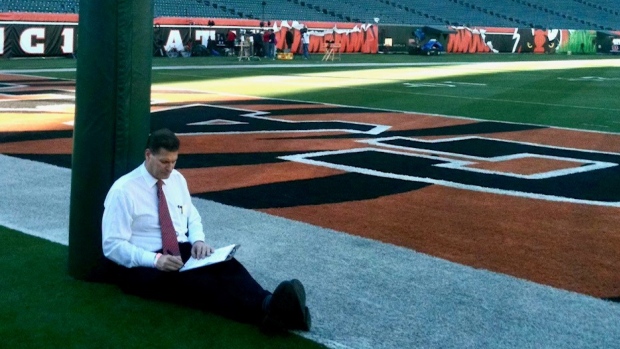 The television screen was grainy, the result of an aerial atop my grandfather’s Haliburton cottage that let us watch snowy images that passed for television in those days.

The Dallas Cowboys were playing and my cousin, eight years older than me, pointed out a player in the game he’d played high school basketball against in Burlington, Ont.

That was the first time I ever heard the name Chris Schultz.

I was 16 and I can still recall watching the image of No. 66 at left tackle pushing off the line of scrimmage through all that static on the screen.

In those days, Canadians in the NFL were rare. Very, very rare. So, the significance of what I was watching was not lost on me.

Never could I have imagined that No. 66 would one day become a trusted work colleague, a friend, and someone I would come to know as an empathetic and gentle soul.

Or that I would write his obituary for SportsCentre, 38 years later.

Just like it was on Monday when I called Chris’s radio broadcast partner, Mike Hogan, just to make sure I had the right phone number after repeatedly being unable to reach him. (By his own admission, Chris was not particularly skilled using cell phones, so I knew my calls might just have fallen through a crack.)

I did have the right number, but I didn’t make that call. Three days later he passed away from a heart attack at age 61.

I first met Chris during the 1991 CFL season when I was a 23-year-old reporter new to the business and he was part of one of the most dynamic CFL teams there’s ever been, an Argonauts team that featured rookie receiver Rocket Ismail, quarterback Matt Dunigan and running back Pinball Clemons in their primes.

My biggest memory of Chris from that season came after a game in Toronto against Winnipeg, when Blue Bombers linebacker Tyrone Jones entered the Argo locker room to get something autographed by Ismail. (Yes, that really happened).

On his way out, Jones shouted “We’ll see you f***ers in the Eastern Final!”

Chris had surely seen and heard enough of the blabby Jones during the game, and this was too much.

He was the only Argo who took a stand, pointing and shouting at Jones, asking him how he thought he could come into their locker room and act this way.

The two had to be separated and nothing more came of it. But it gave me a glimpse at the fire that burned inside him. (The Blue Bombers did in fact meet the Argos in the Eastern Final but lost by a score of 42-3.)

It was years later when we connected again, this time at TSN where he’d been hired in 1998 and where I began to appear in the early 2000s while still working for The Globe and Mail.

Chris was such a warm and compassionate human being. It was hard for me to reconcile that he was the same guy I’d seen lose his cool in the locker room roughly a decade earlier.

I never knew Chris personally when he was a player. But I remember hearing a story from an Argo staff member that once, when Chris was told he had a season-ending injury, he broke down and cried in the doctor’s office.

When I got to know him at TSN, I understood how much football meant to him and how much he cherished every moment he got to spend in or around the game.

Our friendship grew to the point where we would have introspective conversations that were far more about human nature than football. We talked about the risks he faced having played in the pre concussion-awareness era, and whether he would do it again, given what he knew today. He said he would because nothing could equal those experiences he’d had as a player.

Chris had an innocent curiosity about the world beyond football and he would needle me about being the know-it-all guy. That was one of the dynamics in our friendship.

More than anything, he just loved to be around football, never more than during a Grey Cup or Super Bowl week, reminding us throughout how lucky we were to be there.

I can recall 30 minutes before a Super Bowl kickoff getting a text from him that read simply “I feel very special and lucky right now.” That kind of thing happened a few times.

It was his appreciation for what he did for a living that always resonated with colleagues. It’s why he always worked so hard at it, bringing pages of notes with him to the studio every night.

Chris was equally proud of his time in the NFL and CFL, but I learned how disappointed he’d been that his NFL career lasted only three seasons.

In 2011, Chris and I were both part of the TSN crew covering the Super Bowl between the Packers and Steelers in Dallas. As we drove around the city during the week, there were times you could see Chris’s mind spinning as the sights of the city came back to him and sparked recollections.

One night our crew went to a local mall to visit a Dallas Cowboys merchandise store. Chris wouldn’t go inside, taking a seat outside. I asked him why. As I recall, he just shook his head. There might have been some words as well, but not many.

About a week after we got back, I got an email from him apologizing for what he felt was being aloof during the week. It said simply “I hope you understand … Dallas for me will always be unfinished business.”

Today, we all have that feeling because Chris’s business was certainly unfinished.

TSN producer Dennis Beram, who accompanied Chris on his NFL assignments, posted a picture on Twitter today that captures him perfectly.

It’s Schultzy sitting at the bottom of a goalpost, cramming in more prep time for that evening’s hit.

Crushing news last night. We lost my dear friend Chris Schultz. Not too many people have touched my life the way the big man did. Football was his life. We shared so many memories that I will take with me for the rest of my life. I love you Schultzy. Until we meet again RIP 🙏 pic.twitter.com/9Q6RsXz6y0

If you want to know the guy I knew, that’s him.

That’s how I will always remember him.

And like he did so often, I will smile.