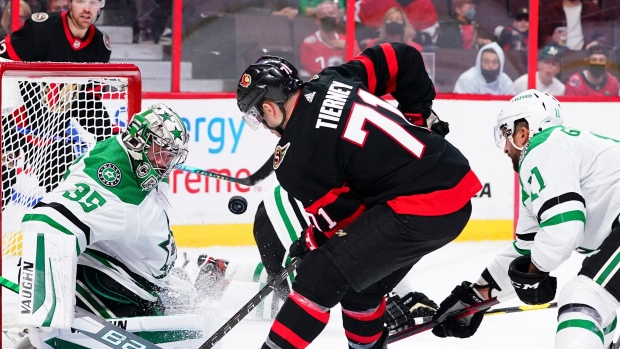 OTTAWA — Getting off on the right foot can make all the difference, and so far the Ottawa Senators are reaping the rewards for doing a lot of things right.

The Senators defeated the Dallas Stars 3-2 Sunday thanks to a pair of goals by Chris Tierney and a solid performance by Filip Gustavsson.

Gustavsson made 32 saves in his first regular-season NHL game since May 12.

Last season the Senators got off to an abysmal start going 1-8-1 through their first 10 games, but so far head coach D.J. Smith has been pleased with what he’s seen.

“I still have nightmares about how long it took us to get our second win,” admitted Smith, who picked up his 50th victory as a head coach. “To get two wins in three games is good for us, especially going into a three-day break here.”

Michael Raffl and Joe Pavelski scored for the Stars (1-2-0).

Anton Khudobin, who stopped 24 shots, suffered his first regulation loss against the Senators. Coming in, the Stars netminder was 8-0-2 against Ottawa.

Dallas head coach Rick Bowness would have preferred a better start from his team, but still believed a result was up for grabs.

“I think we deserve better than a loss,” said Bowness. “We deserved a point and didn’t get it, but a couple of guys that we need to get going, got going.

"We’ve got some guys trying to find their game, guys frustrated with their game and we're gonna have to play our way through it.”

This marked the first American-based opponent to visit Canadian Tire Centre since March 5, 2020 and it was a welcome change for the Senators, who only faced their Canadian counterparts last season due to the pandemic.

“I think it was great,” said Connor Brown. “I enjoyed playing against a new team, something different. They play a different style of game than a lot of the teams we played against in the North (Division) last year so it was good. It was nice the way our game held up against a team you haven’t seen in a while.

"And we felt good, we feel confident.”

The Senators have a very different lineup from the last time the two teams played one another, but Dallas’ Tyler Seguin says there really were no surprises.

“We play these young, fast teams and those are the ones you need to be careful of because they go all out,” said Seguin. “They’re all fighting for jobs. They’re fresh in the league with excitement so you know they’re going to be coming and they did (Sunday) and they did a good job.”

For the second straight home game the Senators were able to hold off a third-period rally by their opponent.

The Stars made it 3-1 as Pavelski was able to pick up a loose puck in front off a Radek Faksa rebound to make things interesting, but couldn’t complete the comeback.

Ottawa scored two power-play goals in the second to take a 3-1 lead but finished the period without Tim Stutzle. He returned to start the third.

Stutzle was slashed by Faksa and immediately left the ice.

“The medical staff is so good these days and they have X-rays so I knew right away it was negative,” said Smith. “It was just scary that he got hit on that bone that he broke a couple years ago.”

Tierney’s first goal deflected off his chest midway through the second period, and he was able to get one past Khudobin late in the frame for his third of the season.

Last season Tierney started the year with three goals in four games and then went 29 games before scoring again.

“I’m just trying to do whatever I can to help the team win,” said Tierney. “A couple good bounces. But that’s what they say, is if you go to the net you’re going to get bounces, so it’s good.”

The two teams exchanged goals in the first to make it 1-1.

The Stars scored on their first shot as Raffl had room in front and buried a feed from Alexander Radulov. Less than a minute later Paul tucked a backhander under the crossbar.

Notes: Brady Tkachuk did not play Sunday, but will likely make his season debut Thursday for the Senators. ... Scott Sabourin and Victor Mete were healthy scratches for Ottawa. ... Stars defenceman John Klingberg missed his second straight game with a lower-body injury suffered in the team’s season opener.