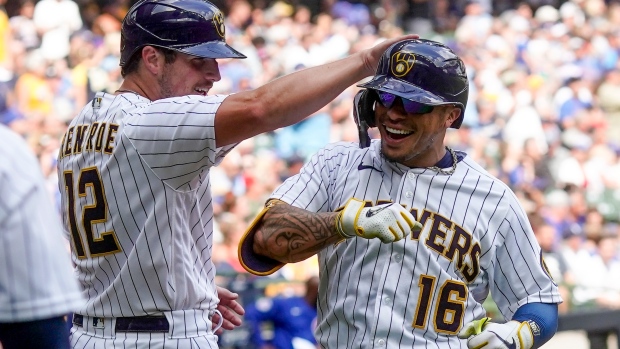 MILWAUKEE (AP) — Christian Yelich and Kolten Wong each homered for the second straight game and Garrett Mitchell drove in two runs with his first hit as a major leaguer, leading the Milwaukee Brewers over the Chicago Cubs 9-7 Sunday.

Mitchell, Milwaukee’s first-round choice in the 2020 MLB draft, made his debut Saturday as a defensive replacement after getting called up from Triple-A Nashville, where was hitting .343 with nine RBIs in 20 games.

The 23-year-old outfielder flied out his first time up in the third. Mitchell then hit two-run single the next inning off Sean Newcomb (2-1) that put Milwaukee ahead for good at 3-2.

“Every guy wants to be in that situation,” Mitchell said. “It was nice being able to contribute.”

Yelich followed by sending an 0-1 fastball over the wall in left for his 11th home run of the season and Wong added another two-run drive in the fifth for a 7-4 lead.

"He’s been dominating lefties pretty good but he didn’t get one out," Cubs manager David Ross said of Newcomb. "I didn’t expect it to go that way because he’s been throwing the ball well.

Eric Lauer (10-5) gave up four runs in five innings, including a two-run home run to Nico Hoerner in the fifth.

“It was just one of those days when you have to gut through it,” Brewers manager Craig Counsell said. “Fortunately, the offense picked him up.”

Franmil Reyes hit a two-run homer in the ninth off Brad Boxberger and Hoerner followed with a single. Devin Williams relieved and got three outs for his ninth save.

Pitchers Justin Steele and Adrian Sampson will stay back in Chicago while their teammates travel to Toronto, unable to enter Canada because of their vaccination status and that country’s COVID-19 regulations.

Normally, the Cubs would only be able to replace Steele since Sampson wasn't slated to pitch. But because he pitched fewer than three innings Sunday, the team will be able to add two players to their roster for the trip.

Brewers: RHP Trevor Rosenthal said that he still hopes to pitch this season despite suffering a lat injury during his last rehab outing.

“I’m not giving up on that,” said the 32-year-old righty, who hasn’t pitched in the majors since 2020. “The injury has a really high success rate and just healing on its own. But it does take time and we’re right in the season, so I just don’t have a lot of time. I think in a couple weeks we’ll have a really good idea if it’s going to be possible.”

Cubs: After working four scoreless innings against the Cardinals in his big league debut last week, right-hander Javier Assad returns to the mound Monday when the Cubs open a three-game series against the Blue Jays in Toronto.

Brewers: Reigning NL Cy Young Award winner Corbin Burnes (9-6, 2.84 ERA) gets the start Monday as the Brewers take on the Pirates in the first of a three-game series in Milwaukee.