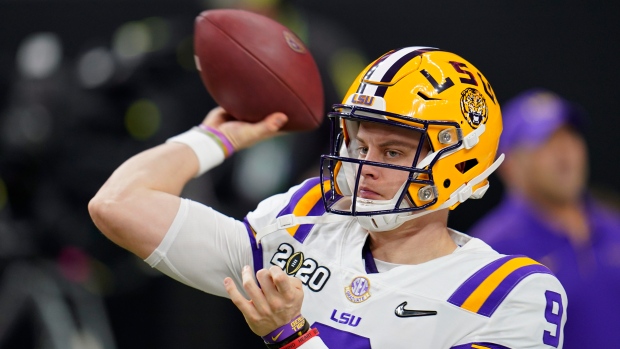 The Cincinnati Bengals, who hold the rights to the no. 1 pick in the 2020 NFL Draft, have long been attached to top prospect, former LSU quarterback Joe Burrow, and on Wednesday two members of the team's coaching staff shared their thoughts on Burrow's potential as an NFL player.

The Bengals, who finished an NFL-worst 2-14 this past season, are expected to move on from longtime starter Andy Dalton in favor of Burrow. After not garnering much attention through the first four years of his collegiate career, Burrow's NFL draft stock rose dramatically this past season after he led LSU to an undefeated record, which included a win in Monday's National Championship Game. Burrow's stellar season also included the quarterback winning the 2019 Heisman Trophy by a record number of votes.

"He's got natural pocket feel. He feels it," Bengals offensive coordinator Brian Callahan said. "It seems like he never takes his eyes off down the field. He extends the play really, really well. He's a lot faster than you might assume when you see him running away from all those SEC guys. He's got incredible up-field accuracy. The ball hardly ever hits the ground in a game, which is rare. He just naturally puts the ball in places where those guys can make plays."

In his praise of Burrow, Callahan also described the quarterback as being "as advertised."

The Bengals, who will be coaching this year's South team at the Senior Bowl, could potentially get their first up-close look at Burrow if the quarterback elects to attend the annual showcase for senior college football players happening on Jan. 25. But as the presumed No. 1 pick, Burrow could very well elect to skip the event.