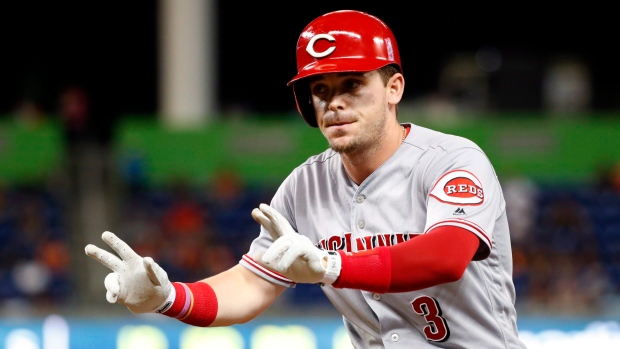 CINCINNATI — Scooter Gennett began a rehab assignment Monday, the final step in returning from a severe groin injury in spring training that has sidelined the Cincinnati Reds second baseman all season.

Gennett will play five days with Single-A Daytona and move up to Triple-A Louisville to continue the rehab, which will last until he feels ready to come off the injured list. Manager David Bell said Gennett will be back in the starting lineup as soon as he's able.

"We all know he's going to play," Bell said. "He's been a big part of our offence the last few years. There's no reason that would change.

"There may be some limitations at the beginning, to make sure he's healthy and all that."

In the last two years, Gennett has 50 homers and 189 RBIs, joining Dave Parker and Deron Johnson as the only Reds to put up such numbers in their first two seasons with Cincinnati. He was an All-Star for the first time last year, when he finished second to Milwaukee's Christian Yelich for the batting title at .310.

The Reds are last in the NL Central at 31-38 with one of the majors' worst offences and could use Gennett in the middle of the lineup.

Cincinnati claimed Gennett off waivers from the Brewers a day before breaking camp for the 2017 season, and he had a career year. Gennett became the first major leaguer to have four homers, five hits and 10 RBIs in a game. He also led the majors with four grand slams, joining Lou Gehrig as the only players with a four-homer game and a four-grand slam season.

Gennett avoided arbitration and settled for a one-year, $9,775,000 deal in 2019. Gennett, who turned 29 in May, is a free agent after this season. He'd like to stay in Cincinnati, but the Reds have held off deciding how he fits in their long-term plans. Several other players are eligible for free agency after the season, including starters Alex Wood and Tanner Roark and right fielder Yasiel Puig. Wood and Puig came to the Reds in an off-season deal with the Dodgers.

Wood also has been sidelined since spring training with a back injury. He'll throw batting practice on Tuesday and again over the weekend. If those sessions go well, he could begin a rehab stint in the minors next week.