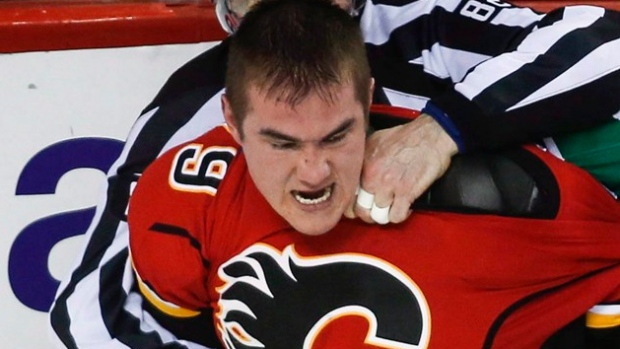 Legal firm Ruttan Bates says Jayson Eyma has dropped a civil lawsuit against Ferland over a scuffle outside a bar in July 2012.

The law firm says Ferland has dropped a counterclaim in which he was seeking damages for the fight and for malicious prosecution.

Eyma had alleged that Ferland sucker-punched him in the face, fracturing a bone that required surgery.

Ferland, who was acquitted of criminal charges, has always said he was defending himself, his aunt and his girlfriend from an unprovoked attack.

His lawyers say he did not make any settlement payment.

Ferland says he can't wait to get back on the ice with the NHL Flames after a solid performance during the playoffs.

"I have never been more focused and committed to my career, my teammates and my community," he said in a release Monday.

"Calgary has been so good to me and I want to be known for doing things on and off the ice that make everyone in the city proud."

A jury found that Ferland acted in self-defence when he threw a punch and knocked out Eyma outside the Stageline Saloon in Cochrane, Alta.