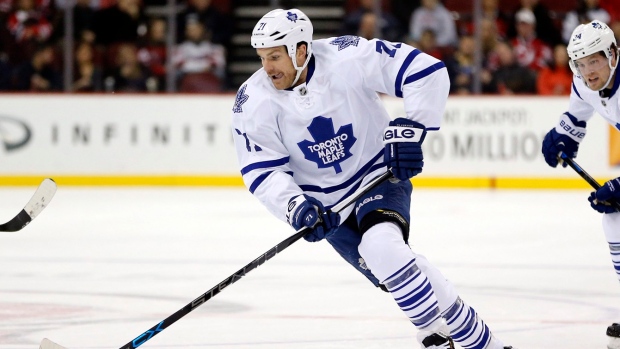 TORONTO - David Clarkson got to Air Canada Centre on Saturday and got the surprising news. For the first time since signing with the Maple Leafs, the veteran right-winger was a healthy scratch.

Clarkson didn't see it coming and by Monday was eager to move past another low in his tumultuous tenure in Toronto.

"It's never easy, but it's behind me," Clarkson said. "I went to practice today, got out there, got a good sweat on and get ready for tomorrow."

But tomorrow might bring little consolation. After the Leafs beat the Edmonton Oilers to end their losing streak on Saturday, Clarkson is likely out again Tuesday night against the New York Rangers.

Interim coach Peter Horachek said he hadn't made a final decision but indicated he'd like to stick with a winning lineup. That means the man with the US$36.75-million, seven-year contract probably won't be part of it.

"I don't really look at the contract," Horachek said. "I know it, I understand the political ramifications of everything that goes on. But I have to try to push myself into just staying as a coach and doing what I think is best for the team."

Clarkson has just two goals and two assists in his past 26 games dating to Dec. 10. Once a 30-goal scorer with the New Jersey Devils, Clarkson has three in his past 30 games this season.

Horachek said last week he would begin sending messages to players to hold them accountable for their play. Consider it received.

Clarkson was visibly uncomfortable when discussing his status after Monday's practice. He referenced his young children putting a smile on his face at home and kept repeating that the important part was the Leafs won a game after losing 11 in a row.

Asked about what he might need to improve, the 30-year-old diverted attention to the team.

"I think as a team there were a lot of things we could do better in that stretch," he said. "I think just getting back to where we were there early in the season and hopefully get some bounces to go our way."

Notes — Despite Jonathan Bernier being back from an illness, James Reimer will start in goal for the Leafs against the Rangers after stopping 31 of 32 shots to beat the Oilers. ... Defenceman Dion Phaneuf skated for at least 15 minutes before practice, and Horachek offered no insight on how much more time the captain will miss with a hand injury. Phaneuf is expected to miss his seventh straight game Tuesday.