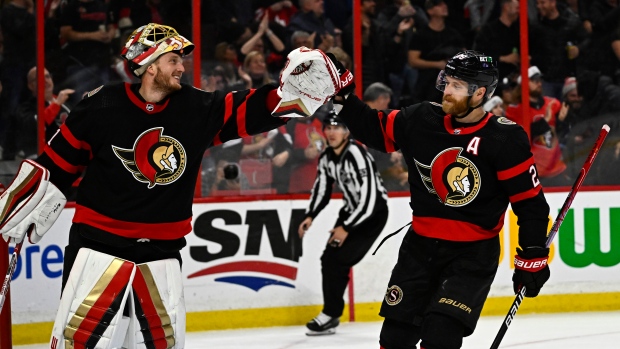 OTTAWA — The Ottawa Senators seem to have found their footing.

Claude Giroux led the way with a pair of goals and an assist as the Senators picked up a solid 5-2 win over the San Jose Sharks Saturday night. It was Ottawa's second straight victory and fourth in its last five games.

"(Saturday) was a great example of you just have to stick with it.”

The team also gave full credit to the 17,101 on hand who were vocal from the start.

“Kudos to the fans and the crowd that gave us that energy,” said Senators coach D.J. Smith. “If it’s a dead crowd or maybe there’s not enough fans here tonight maybe we don’t find this gear. I think the guys felt that, right from the anthem on out.”

Ottawa especially benefitted from going an impressive 3-for-5 on the power play against the best penalty kill team in the league.

“You can’t take that many penalties against that team,” said Sharks coach David Quinn. “Some sloppy stick penalties that we can’t have. It’s frustrating because I thought there were some things in our game that I liked. We had some good chances we didn’t capitalize on.”

Tomas Hertl scored both goals for the Sharks (8-15-4), who are 1-2-0 so far through their four-game road trip that wraps up Sunday. Kaapo Kahkonen stopped 34 shots.

“We find ways to lose,” said Sharks captain Logan Couture. “I’ve said that many times this year. Until we fix that, and find ways to start winning games, it’s not going to be going in the right direction.”

The Senators entered the contest on the heels of an emotional 3-2 overtime win against the New York Rangers Friday night. The Sharks, although having not played since Wednesday, did not look like the more rested team.

Ottawa scored its third power-play goal 5:18 into the third period when Mathieu Joseph fed Chabot to take a 4-2 lead.

Chabot is now up to three power-play goals on the season after entering the campaign with just three for his career. It was also his 200th career point, making him just the fourth Senators defenceman to reach the milestone.

“It’s something I’ve tried to change,” said Chabot of being more productive on the power play. “I think everybody around the league kind of got aware that I’m a pass-first kind of guy and this year I’ve tried to bring more pucks to the net and lucky enough they’ve been going in.”

The Senators' final goal came as a result of an impressive sequence of events. The Sharks were on a 4-on-3 power play that consisted of numerous chances and Ottawa’s Travis Hamonic being without his stick at a point. But just as the power play expired, Giroux was able to break in alone and fire a slap shot past Kahkonen.

Forsberg made a number of incredible saves in the sequence leading to the goal.

“At the time you’re not really thinking about it too much,” admitted Forsberg. “I see the stick that’s broken and obviously that’s not good for us, but I thought we did a really good job of us just staying there and staying within our box and try to get as many passes as we could and then we got a good bounce and we scored so it was great.”

After trailing 2-1 to start the second, the Senators took a 3-2 lead after 40 minutes.

A brutal giveaway by Matt Benning put the puck on Giroux’s stick and he took full advantage for his 10th of the season at 5:22 of the second period.

Ottawa took the lead at 16:40 of the middle frame with its second power-play goal of the night thanks to a perfect touch pass from Drake Batherson to Stutzle.

Hertl netted his pair of goals in the first period to help the Sharks jump out to an early lead.

The Sharks centre beat Forsberg on the power play 7:26 into the frame to open the scoring.

Tkachuk tied the game with a power-play goal of his own at 10:25 of the period jumping on a rebound in front of Kahkonen.

Thirty-eight seconds later, Hertl scored his second when he was left alone in front and beat Forsberg to restore San Jose's lead.

The Ottawa Senators and Seattle Kraken are the only two NHL teams Erik Karlsson hasn’t scored a goal against.

With his 44th NHL career goal, Tim Stutzle set a franchise record for goals before turning 21 years old. … The Senators were without defenceman Artem Zub after taking a puck to the face Friday in New York.

The Senators host the Los Angeles Kings Tuesday night, while the San Jose Sharks are back in action Sunday night against the Buffalo Sabres.