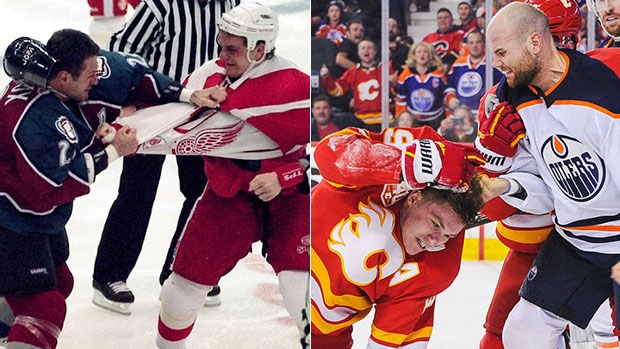 What would Claude Lemieux do?

That is the question with the hockey world’s eyes glued to the renewed Battle of Alberta and Matthew Tkachuk, a player cut from the same cloth as one of the sport’s most notorious agitators.

“Do I think he needs to go out and fight that player? Maybe,” Lemieux said on Wednesday morning, pausing to chat while on vacation. “Sometimes it’s better to get it over with.”

This is a lower-case battle, better referred to as an Alberta Beef, when compared to the blood spilled and faces broken during the mid-90s wars between Lemieux’s Colorado Avalanche and the Detroit Red Wings.

The only things similar are the modus operandi of the agitator involved and the buzzwords being thrown around.

Lemieux listened to months of criticism and heckling for “turtling” in a retaliatory brawl with Darren McCarty in response to his jaw-shattering hit from behind on Kris Draper in the 1996 Western Conference Final.

Edmonton has been in a tizzy in the 18 days since Tkachuk ducked for cover on Jan. 11 after taking what former NHL players publicly labeled as three predatory runs at Zack Kassian. The Nielson Show on Edmonton radio TSN 1260 has been playing a parody “tribute” song about Tkachuk titled He’s a Turtle, written to the tune of Denis Leary’s A--hole.

For Lemieux, there was only one move in the playbook that could both shed that unwanted turtle label and diffuse the drama in 1997.

“In my situation with Detroit, it wasn’t until the following year that I fought McCarty off the opening faceoff that put an end to that,” Lemieux said.

That’s why fans at both ends of Highway 2 are eager to see how Wednesday will shake out.

Rishaug: Wouldn't surprise me if Tkachuk just wants to get this out of the way

TSN's Ryan Rishaug opened up about his recovery from covering the Humboldt Broncos bus tragedy and the path he took to get some help, also a preview of tonight's game between the Oilers and Flames

This is Kassian’s first game back after a two-game suspension for going to town on an unwilling combatant in Tkachuk, whose hits were deemed legal both on the ice and in review.

After Tkachuk played nice on the same Pacific Division team with Connor McDavid and Leon Draisaitl at All-Star Weekend, will he have the same desire as Lemieux to answer the bell against Kassian and be done with it? Will there be any further fireworks? Or is this much ado about nothing?

The NHL has sent Department of Player Safety senior vice-president George Parros and director of officiating Stephen Walkom to Edmonton to serve as a deterrent for any shenanigans. They are expected to again deliver a message to the Oilers and Flames’ staffs to keep their players in line.

Lemieux, now 54 and advising a stable of NHL players as an agent with 4Sports and Entertainment Group, says that because this is such a different era he could see it go either way.

“It’s a tough one,” Lemieux said. “I don’t know if there is an easy answer. I’d go out there and play the game and see what happens. Matthew is a tough kid and sometimes it’s better to get it over with, but it’s not that simple. I can look at it in many different ways.

“I also don’t think there is anything wrong with not fighting, going out there and scoring and helping your team win. He is an important player.”

No player has been in the crosshairs quite like Tkachuk since Lemieux. The straw that stirs the Flames’ drink is the first since the four-time Stanley Cup winner Lemieux who has the rare ability to impact the opponent’s net as much as their psyche.​

Kassian’s rage to get his pound of flesh on Jan. 11 not only cost the Oilers in a four-point game in the razor-close Pacific standings, it also cost him $20,967.74 in forfeited salary.

That penchant Tkachuk has for making rivals go wild is something that makes Lemieux smile.

“He’s a great player and he’s effective,” Lemieux said. “If you’re going to build a team, he’s going to be one of the first players you pick. He does more than score goals – a hit or something after the whistle. He can definitely stir the pot like I did.

“I have a lot of respect for the way he plays.”

Lemieux made sure to point out that he also respects Kassian because “he’s not just an enforcer, he’s a good hockey player.” Kassian, 29, is just shy of setting new career highs in goals (13) and points (28) in just the first half of the season, often playing on a line with McDavid.

That’s part of what makes this week so juicy. Not only is it a hugely consequential divisional game in the standings, it also features two compelling combatants in Tkachuk and Kassian.

The fact that we get two meetings in a span of four days doesn’t hurt, either.

“These are two teams with a long history,” Lemieux said. “Sometimes people think incidents that cross the line take away from the game itself, but like a good rivalry, I think it’s healthy for hockey. Fans love it. That’s just how it is.”