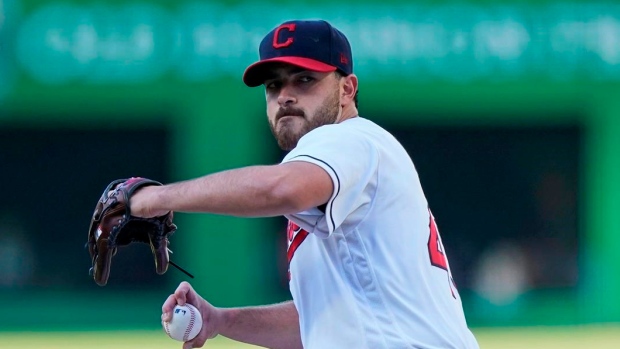 CLEVELAND — César Hernández hit a three-run triple and Aaron Civale pitched seven strong innings to stay unbeaten as Cleveland struck back after being no-hit for the second time in 24 days by belting the Cincinnati Reds 9-2 on Saturday night.

Cleveland became the 18th team to be no-hit twice in the same season on Friday, when Wade Miley shut them down for the majors' fourth no-no in 2021.

There was no more dubious history for Cleveland. José Ramírez had two RBIs and Cleveland scored six times off starter Luis Castillo (1-4), who was hurt by the Reds making two errors.

Civale (5-0) allowed one run and five hits. The right-hander improved to 11-0 when he's supported by at least three runs.

Cleveland manager Terry Francona was anxious to see if his team would bounce back from another embarrassing performance — the Indians are only the second team since 1900 to be no-hit twice in its first 31 games.

Cleveland did just that, collecting 11 hits with one of their most lopsided wins this season. Cleveland has won 10 of 13 overall.

The only other team to be no-hit twice so quickly in the modern era is the 1917 Chicago White Sox, who had it happen it to them on consecutive days. They went on to win the World Series.

Tyler Naquin, who dropped a routine fly for one of Cincinnati's errors, homered in the ninth.

Castillo gave up consecutive singles to open the inning before Austin Hedges' RBI single put Cleveland ahead 3-1. Reds shortstop Kyle Farmer then dropped a throw on a potential force out and double play to load the bases, and Hernández capitalized by pulling his triple into the right-field corner.

Cleveland moved quickly to get their first hit since returning from a 6-1 road trip. Amed Rosario walked with one out in the first and and Eddie Rosario delivered a two-out RBI double off Castillo, who has a 15.43 ERA in the opening inning this season.

It was the second no-hitter Bell has been involved in. He played second for Philadelphia in 2003, when Kevin Millwood threw one for the Phillies.

“It was even different than a playoff game, the anxiety,” Bell said. “You really have to convince yourself you want the ball hit to you.”

The rash of early no-hitters has spawned theories as to why they're happening so frequently, and what's led to an offensive decline.

Better pitching? Too many hitters trying to hit homers?

"I don’t know if I have a great idea," Francona said. “Offence as a whole is down. The approach to hitting has changed so much that you don’t see guys shortening up with two strikes, maybe hitting the ball the other way, so there’s more strikeouts. There’s shifting and guys aren’t taking advantage of it, so you’re gonna see less offence.”

Cleveland: C Roberto Pérez is expected to be back in Cleveland on Sunday after undergoing surgery on his fractured right ring finger. He had three pins inserted to stabilize the break. Pérez will need at least two months to recover.