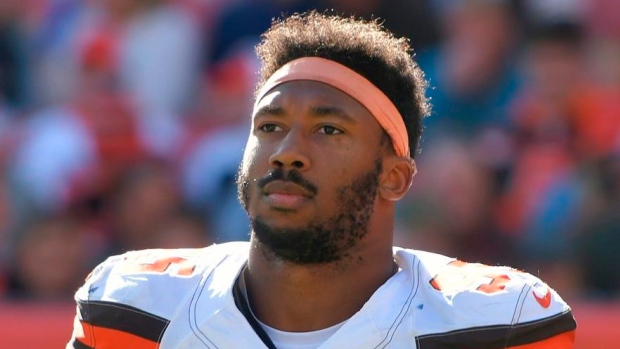 CLEVELAND (AP) — Browns All-Pro defensive end Myles Garrett will not play in Sunday's game at Atlanta after suffering multiple injuries when he crashed his car while speeding earlier this week.

Cleveland downgraded the star on Saturday from questionable to out before flying to Georgia to take on the Falcons. Garrett will not make the trip.

The 26-year-old Garrett sustained injuries to his shoulder, biceps and had several cuts and bruises after he veered off a road near his home, hit a fire hydrant and flipped his Porsche on Monday after practice.

On Friday, Garrett said he felt fortunate to walk away from the wreck. A female passenger in the car also suffered minor injuries.

Garrett, who has been cited numerous times by police for speeding, said the accident was a “wake-up” call and he pledged to be more careful driving.

Garrett is one of the NFL's elite pass rushers and Cleveland's defense just isn't the same without him on the field. The Browns could also be without end Jadeveon Clowney, who is listed as questionable with an ankle injury. Clowney sat out last week's win over Pittsburgh with the injury.