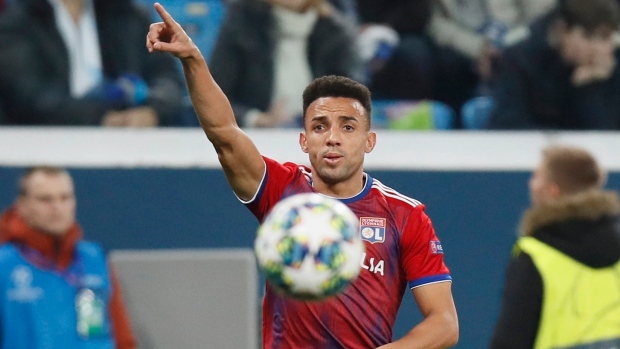 Depleted by injuries and deprived of a clear game plan, Lyon showed character and clinical efficiency to come from behind and win at Strasbourg 2-1 in the French league on Saturday.

On a cold evening in Alsace, Lyon suffered throughout and converted its few chances. Midfielder Jeff Reine-Adelaide snatched the winner 15 minutes from time from Maxwel Cornet’s assist after the Lyon striker cancelled Strasbourg’s opener.

The result, which ended a four-game winning run for Strasbourg at its home stadium, lifted Lyon to sixth place in the standings, 11 points behind leader Paris Saint-Germain.

With a bunch of injuries already, Lyon coach Rudi Garcia lost another important player as defender Leo Dubois hobbled off the pitch in the 83rd minute with an apparent knee injury.

Forced to reshuffle his lineup, Garcia handed midfielder Maxence Caqueret his first start as a replacement for Thiago Mendes, one of three key players missing the game through injury alongside Memphis Depay and Houssem Aouar.

All three were absent for Lyon’s 2-0 loss at Zenit Saint Petersburg in the Champions League midweek.

The 19-year-old Caqueret got off a terrible start and put his team in trouble in the sixth minute when he gave the ball away near the midfield line. Strasbourg launched a fast counterattack as Youssouf Fofana sped down the pitch and found forward Ludovic Ajorque, whose shot was well defended by Marcelo.

Playing with intensity and high pressing, the hosts won most of the duels and were dangerous on the counter. They found a cutting edge in the 22nd minute when Ajorque played a quick one-two on the left flank which destabilized the Lyon defence. Ajorque crossed the ball for Fofana, who beat ‘keeper Anthony Lopes from a tight angle with a strike at the far post.

Cornet levelled five minutes before the interval. He connected with a well-timed through ball from Caqueret inside the box, turned down a defender and fired a left-footed shot past Matz Sels.

Lyon weathered the hosts’ pressure in the second half and patiently waited for an opening that came in the 75th. Slowing down the pace from the edge of the box, Cornet made a precise cross at the far post for Reine-Adelaide to head in.

Juan Ferney Otero’s second-half dismissal caused a collapse as Amiens lost 4-2 at Montpellier, which climbed to fourth in the table.

Amiens conceded three goals in the space of eight minutes after the Colombian striker was sent off for an ugly foul on Hilton. Montpellier produced its biggest win this season, and extended its unbeaten run to six matches in all competitions.

Victor Osimhen scored his eighth goal this season to help Lille recover from its Champions League loss to Ajax midweek.

Osimhen scored the winner from the penalty spot to guide Lille to a 1-0 win over Dijon.

Third-placed Angers, the surprise package, lost at Nice 3-1, Nimes was held by Metz to 1-1 and Bordeaux drew at Reims 1-1.