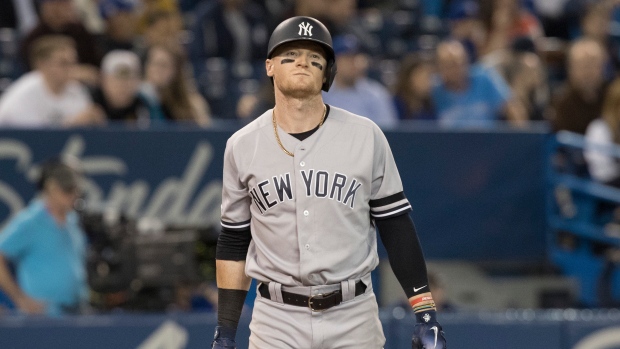 CHICAGO — Hot-hitting Clint Frazier was squeezed out of the New York Yankees' powerful lineup and sent down to the minors Sunday, another frustrating episode in what's been a breakout season for the 24-year-old outfielder.

The Yankees got AL home run leader Edwin Encarnación in a late-night trade with Seattle, then made the roster move following a 10-3 win over the Chicago White Sox. Frazier batted cleanup and went 1 for 5.

Frazier is hitting .283 with 11 home runs and 34 RBIs in 53 games, a key factor in helping the Yankees stay within a half-game of Tampa Bay atop the AL East. He was optioned to Triple-A Scranton/Wilkes-Barre.

"Yeah, pretty surprised," Frazier said, adding, "It's a tough pill to swallow. It's never fun especially with how much I've felt like I've contributed to this team this year."

New York opens a three-game series at home against the Rays on Monday night, with Encarnación set to become the team's designated hitter. Giancarlo Stanton is expected to come off the injured list on Tuesday and fellow slugging outfielder Aaron Judge might not be far behind.

The move came two weeks after Frazier made a couple of misplays in a Sunday night loss to Boston at Yankee Stadium. Frazier didn't talk to the media after the game, and was unapologetic for his stance when he did talk the next day.

That approach didn't exactly thrill the Yankees. Still, his bat continued to make an impact the Yankees appreciated and needed.

Manager Aaron Boone said it was "very difficult" to tell Frazier about the minor league assignment.

"He's played a big role on a winning team," Boone said. "That doesn't necessarily stop now, but this is where we're at from a roster situation."

Boone said the Yankees want Frazier to be able to play regularly and there's limited opportunity for him in New York, given the team's suddenly loaded roster. The Yankees also have outfielders Aaron Hicks, who figures to start in centre, and veteran Brett Gardner, who likely will be the top backup.

"Obviously that's tough news to deliver, but hopefully he can make the most of it and continue to get better at his craft. We know that's he going to play a role for us again," Boone said.

"He's got a chance to be a great player in this league and he's already shown that," he said.

Frazier said Boone told him that "this is the reality of things."

Frazier said he figured he might become a victim of a numbers game.

"Not because of Encarnación, but maybe because of Judge or Stanton," he said.

Frazier was the overall fifth pick in the 2013 draft by Cleveland and was dealt to the Yankees in July 2016 as a part of a package for star reliever Andrew Miller.

While the Yankees added another power bat with Encarnación, there's speculation they will try to get an ace pitcher before the July 31 trading deadline. Frazier's play could make him a possible bargaining chip for a big deal.

"I've been traded once. Who knows? I can't control that, I just try to play as good as I can to put myself in a good position," he said.