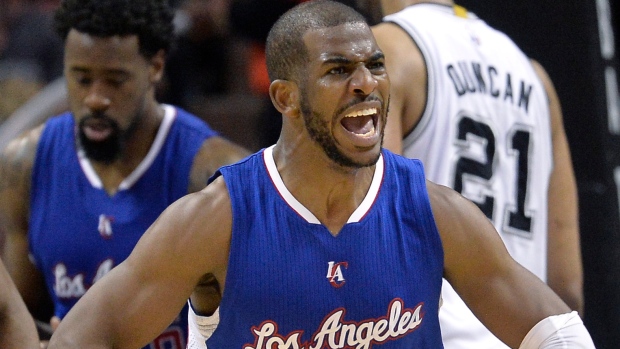 SAN ANTONIO - The Los Angeles Clippers answered their worst loss in playoff history with one of their most uplifting victories.

Chris Paul had 34 points and seven assists, Blake Griffin added 20 points and 19 rebounds, and the Clippers beat the San Antonio Spurs 114-105 on Sunday to even their first-round series at two games apiece.

The Clippers, who bounced back from a 100-73 loss in Game 3, host Game 5 on Tuesday. This is the only series that is tied after four games.

Los Angeles coach Doc Rivers said the team's "spirit" was broken during that lopsided loss, but he didn't coddle his players during a two-hour film session Saturday.

"Doc pretty much went at all of us," Paul said. "He told us about ourselves and he told us what we didn't do. He told us that when it comes to the playoffs, it is the players' time."

The Clippers responded by shooting 54 per cent from the field after being held to 34 per cent Friday.

J.J. Redick scored 17 points for Los Angeles and Austin Rivers provided an unexpected boost off the bench with a post-season career-high 16 points.

"It's more than just shooting the ball," Paul said. "Our defence was better and our offensive execution (was better). I think I got more shots because of the tempo of the game that we played at. We played downhill, we set screens; we're tough when we play like that."

"We lacked a lot of discipline," Spurs coach Gregg Popovich said. "We didn't execute sharply enough in what we wanted to strategy-wise or just in general basketball play."

Kawhi Leonard scored 26 points, Tim Duncan had 22 points and 10 rebounds and Tony Parker added 18 points for San Antonio, but Paul proved too much.

The point guard was 11 for 19 from the field and 10 for 10 on free throws while committing just two turnovers in 38 minutes.

Paul hit jumpers over Parker and Duncan in scoring six straight points for the Clippers beginning midway through the fourth quarter. He then drove the lane and kicked out to Redick, who drained a 3-pointer for a 106-92 lead.

Leonard followed with consecutive 3s to pull within 106-98, but Paul settled the Clippers with a pair of free throws.

Paul also made six straight free throws to close the third quarter and give the Clippers an 81-76 lead after the Spurs' attempts to send DeAndre Jordan to the foul line backfired. San Antonio fouled to put Los Angeles in the bonus, but Rivers subbed Glen Davis for Jordan before the Spurs could employ their "hack-a-Jordan" strategy.

"Yeah, (we lost our focus) a little bit at the end of the third quarter," Parker said. "We made a lot of fouls that we could have prevented."

Austin Rivers allowed Los Angeles to keep its momentum when Paul sat, opening the second quarter with seven straight points by backing down 6-foot Patty Mills. Rivers, who is 6-4, was 7 for 8 from the field in 17 minutes.

"We did game plan for him, but not for him to make the shots that he did," Duncan said. "Those are shots that we are kind of willing to give up at that point contested and he knocked them out."

The Spurs never trailed in Game 3, but Jordan helped stake the Clippers to a 6-0 lead Sunday. He finished with six points, 14 rebounds and four blocked shots.

Clippers: The Clippers are 8-3 all-time in Game 4 of a best-of-seven series, but have never won a series after losing Game 3 when the series is tied 1-1. ... Jordan has 10 post-season games with at least 14 rebounds.

Spurs: Duncan became the first player in league history to play 9,000 minutes in the post-season. He also played in his 238th career post-season game, breaking a tie with Kevin Garnett for third all-time. ... Parker had just one assist, giving him 1,044 in the post-season and leaving him four shy of tying Chicago Bulls Hall of Famer Scottie Pippen's for sixth all-time.

The game grew tense in the opening minutes as Parker hit the floor on a drive and screamed for a foul on Paul, yelling, "I'm bleeding! I'm bleeding!" and pointing to a cut along his left eyebrow. Parker and Popovich's tirades led Paul to scream for a technical that wasn't called.

"It's the champs, so no tech," Paul yelled to reporters at courtside.

Paul charged into Duncan off an inbounds two possessions later, drawing a blocking foul on the Spurs veteran. Both players stared angrily at each other, with Duncan rising and telling an official, "He kicked me! He kicked me!" after the foul.

Parker, who was limited to 17 points on 7-for-28 shooting in the first three games, had eight points in the opening 8 minutes.

"He's starting to feel a lot better," Duncan said. "It's great to see him going to the basket, make some plays for us. That will pay big dividends for us with the rest of the series, something else they will have to game plan for."